How Good Was The #DPAAmediasummit 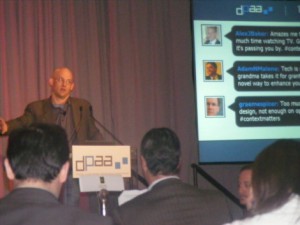 Unfortunately, a terrible seating layout and lack of enough screens meant that only about 15% of the attendance could read speakers’ text and charts or the nearby Twitter screen. Why an industry event centred on digital place-based media (ie. screens) had only two screens (one on either side of the stage) in the venue when an attendance of 400 was the association’s goal is beyond our comprehension.

Actual attendance ended up at about 430 – a record by far for the annual event, and kudos do go out to Susan Danaher, DPAA president, and her team for pulling in that many people. We expect that having the event the same week as the Strategy Institute’s Digital Signage Investor Conference also helped.

And François de Gaspé Beaubien, chairman and chief coaching officer of Zoom Media, who chaired the event and kept his cool, was clearly frustrated with the viewing arrangement and promised faithfully, “This will not happen again. We’ll have the situation fixed for next year’s Summit.”

While there were a few other beefs – for example, such a fast paced agenda leaving little or no time to see the sponsors/exhibitors’ booths outside the main hall – most of the speeches and panels were good and even excellent. The agency panel moderated by David Verklin, partner, VSV Partners, and consisting of Bill Koenigsberg, president and CEO, Horizon Media; Steve Farella, CEO, Targetcast tcm; and David Payne, CEO, Kinetic Americas, drew rave reviews.

Most of the sessions focused on or touched on social/mobile/local and convergence/integration with digital place-based media, and there was some excellent material on research as well as interesting and successful case histories involving: Playtex Sport using Zoom Fitness Network; Naturally Nora using Adspace Digital Mall Network; Turner Sports Broadcasting with Arbitron and Telespace; Dell with Captivate Network; and Intel with the Wall Street Journal Office Network.

We’ll be writing further about both conferences over the next few days.

This entry was posted on Thursday, October 20th, 2011 at 06:01 @292 and is filed under DailyDOOH Update. You can follow any responses to this entry through the RSS 2.0 feed. You can leave a response, or trackback from your own site.