See Your Xmas Wish In Lights

For a second year running, visitors to London’s iconic Piccadilly Circus, will have the chance to tweet their season greetings and have their names in lights. 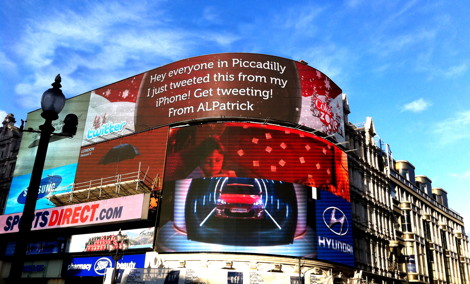 Coke’s screen is the longest-serving advertiser of this site, since 1954, and just in time for Christmas, it is launching its new digital LED display with its Christmas ‘Tweet Your Wish‘ campaign. Consumers all over the world can send their messages via twitter to the sign 24 hours a day until the 23rd December.

The iconic sign, which for months had a wrap announcing Coca Cola was preparing for the Olympics, has been fully replaced by a shiny new LED display. The new signs feature the same 16mm pixel pitch LED as the previous version, yet are considerably lighter, more durable and greener by 20%.

The project was managed by Sedley Place and included the replacement of the adjacent Samsung display also. Both signs were manufactured in the U.S. by Yesco (Young Electric Sign Company) and are, we believe, their first signs to be launched in Europe.

This entry was posted on Monday, December 19th, 2011 at 12:22 @557 and is filed under DailyDOOH Update. You can follow any responses to this entry through the RSS 2.0 feed. You can leave a response, or trackback from your own site.

One Response to “See Your Xmas Wish In Lights”