Footwear store ALDO, is reaching out to its audience in London through Selfridges window to present its Rise collection using a video wall in Oxford Street. 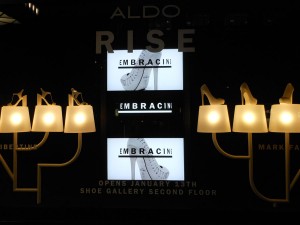 Rise is an interesting concept, where the brand has teamed up with young designers to support and promote their talent. ALDO Rise website states that ‘fashion is no longer a commandment, it’s a collaboration’ and adds that ‘RISE creates a space where informed customers and fashion world insiders can come together to influence and inspire one another.’

Taking into account what is behind ALDO Rise, I am surprise to see just a video wall with no interaction offered to the passers by.

The brand awareness campaign can be seen at Selfridges until this Wednesday (Jan25, having been up only since January 13th). The video wall is made out of two 3×46” HD LCD as well as two 32” HD LCD. The project is being co-ordinated by Jardine Couture Retail Interiors with AllSee Technologies as the hardware provider.

– err, this is best watched with your sound turned off!, Ed

This is not the first time Selfridges has an entire window of digital signage – see our post No more fish in the sea? – on that occasion the screen was interactive. It would be nice to find out if it worked out well for the campaign.

This entry was posted on Monday, January 23rd, 2012 at 02:00 @125 and is filed under Scuttlebut. You can follow any responses to this entry through the RSS 2.0 feed. You can leave a response, or trackback from your own site.