This is not the first poorly thought out piece of PR we have received from Ubiquitous Taxi Advertising – the last was a fine statement from their MD Andrew Barnett, we quote “If other businesses are planning to do well out of the Olympics, London’s taxi driver community is totally justified to do so as well – which when you are talking about greedy London cabbies fresh from attempting to raise fares during the Olympics probably pleased some in the Taxi business. 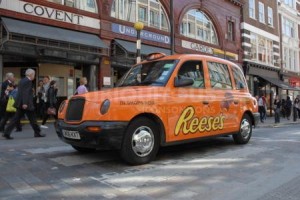 When is a black cab not 'black'?

Many who use taxis would not have agreed when he added “This is fair compensation for the heavy traffic drivers will have to endure at the time of the games”.

The report stated that, we quote “tech-savvy Londoners want more in-cab technology, and what’s more, they want cabs to be branded more clearly to advertise what in-cab services that provide”.

The research reveals that there is a tremendous opportunity in rolling out multi-channel campaigns – integrating online and offline marketing propositions, as more technology becomes available within taxis.

Mind you there’s a lot of interesting data in the report: –

Whilst, signposting payment options on the side of taxis was also highlighted as important – something we errr suggested to Verifone that they do back in May 2011 the report we think does more to promote what Verifone do now as opposed to what Ubiquitous says it currently offers.

This entry was posted on Friday, March 30th, 2012 at 09:59 @458 and is filed under DailyDOOH Update. You can follow any responses to this entry through the RSS 2.0 feed. You can leave a response, or trackback from your own site.

One Response to “Ubiquitous Research Points To A Competitor’s Solution”