VeriFone Systems Inc. has made an an agreement with Sky News to broadcast news bulletins in London’s iconic licensed taxis. 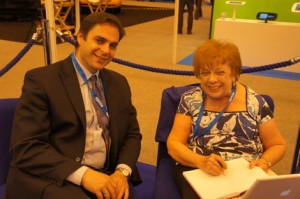 With the launch of the service this month, VeriFone Digital Network will deliver Sky’s breaking news to passengers as they travel around the capital.

“The news will be updated six to eight times a day,” Chris Polos, vice-president media who is the driving force behind Verifone’s Digital Taxi Network, says. “We have it in about 100 taxis today and are adding about 50 a day. Not only the customers love it but the taxi drivers love it, too.”

With 2,400 of the 3,990 Verifone taxis in London sporting screens (the remainder only have Verifone’s payment system), the company is making a special push to have most taxi screens sporting the Sky network by the time the Olympics are held beginning in late July.

Sky and, in the US, NBC, will run constant updates on the Olympics.

Andrew Hawken, editorial director, Sky News Digital, says, “Sky News aims to provide breaking news to users in an as many places as possible. This deal allows us to bring news directly to a large market across London, providing an innovative service in a new location. We are delighted to have the opportunity to allow people to enjoy our news on a high quality screen in the comfort of a black cab.”

Passengers can watch Sky News as soon as the taximeter is activated, controlling settings with a remote just as they would their own TV. The programming and advertising is delivered on a 14-minute loop cycle that matches the length of an average London taxi journey.

“In addition to providing passengers with access to entertainment and news, VNET provides advertisers with a unique opportunity to engage directly with their audience through targeted promotions and information, reaching affluent business professionals and consumers inside the London black cab when they are at their most receptive and least distracted,” says Bud Waller, VeriFone vice-chairman. “Advertising on VNET between Sky programming is a compelling and cost-effective way to extend video brand campaigns. VeriFone Media creates a powerful platform for marketers seeking innovative, dynamic campaigns that resonate with an increasingly ‘on-the-go’ urban consumer.”

We fully expect that Verifone will eventually extend its taxi network into other major UK cities and that the company is also looking at further European expansion in the long run. In the US as well as the UK, it is also looking at eventually switching its static taxi tops to digital, but cost as well the physical needs of being able to withstand bumps and vibrations, weather sealing requirements and other factors make us doubt that it will be a large factor in the immediate future.

VNET’s Taxi TV now spans more than 10- major media markets across the Atlantic. Last year, VeriFone reached an agreement with NBC- owned television stations to deliver NBC Universal’s award-winning content to more than 12,000 taxis in markets throughout the US, including New York City, Boston, Chicago, and Las Vegas. In addition to TaxiTV, VNET’s expanding footprint includes thousands of petrol forecourts and convenience stores throughout the US.

VeriFone was recently awarded ‘Best Contactless/NFC Infrastructure’ for its London taxi operations at the 2012 Contactless Intelligence Contactless & Mobile Awards sponsored by Visa Europe and Telefonica O2. Over the past 12 months, VeriFone has also changed the landscape of the London taxi market with deployments that allow passengers to pay for their journey with a ‘tap and go’ contactless card if they have one and the fare is less than GBP 15.

This entry was posted on Thursday, May 17th, 2012 at 10:00 @458 and is filed under DailyDOOH Update. You can follow any responses to this entry through the RSS 2.0 feed. You can leave a response, or trackback from your own site.