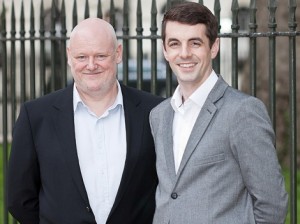 James told us “Traditional and Digital Out of Home is dominated by a few large media owners. However, there are many other small and medium sized networks out there who deliver fantastic, targeted audiences but struggle to make their voices heard in such a competitive environment. Hub Digital Networks aims to bring together the best of these networks into one place so that they can benefit from being part of a large group of networks – both in terms of increased sales and exposure, and also marketing and insight.”

If that rings a bell then that’s because that is exactly what Digicom used to say when they launched!

Hub Digital Networks is already in discussion with a number of important networks that will deliver strong audiences and has so far secured the exclusive rights to represent TONI&GUY Salon Media and Acentic Media, an international provider of digital TV services for leading hotel chains predominantly in the four star market including InterContinental Hotels Group, Marriot and Sofitel.

The business is also working in a consultancy capacity with a number of others.

This entry was posted on Tuesday, May 22nd, 2012 at 06:08 @297 and is filed under DailyDOOH Update. You can follow any responses to this entry through the RSS 2.0 feed. You can leave a response, or trackback from your own site.