São Paulo based Brazilian network Elemidia, which we have covered on several occasions on these pages AND had the privilege of hearing CEO Felipe Forjaz speak at last year’s #DSInvestor Conference in NYC (and his CEO Spotlight here), had more share activity last week. 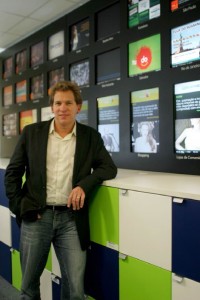 A large portion of Elemidia was bought in September, 2010, by the big publisher Editora Abril (American hedge fund Tiger Global, took a 30% stake Elemídia in 2006 and subsequently increased its ownership to 50% in January, 2009) and now it seems that Abril S.A. has bought the remaining minority interest in Elemidia, taking control over 100% of the business.

Abril S.A. is the company responsible for the Media, Printing, Logistics and Distribution and Services activities of the Abril Group and announced last week the acquisition of the 30% of Elemidia that was still previously in the hands of minority shareholders.

With the acquisition of Agência Mídia in February 2011, the company also began to branch into the static media market in shopping centers, the mass transit network, gyms and the sides of newsstands.

Elemida CEO and super nice guy, Felipe Forjaz, will remain at the helm of the business.

According to Fábio Barbosa, CEO of Abril S.A., the transaction is in keeping with Abril’s on-going efforts to promote broader access to information, culture and entertainment. “In this period of almost two years with Elemidia, we have successfully worked to consolidate the company as a leader of the segment in the country, as well as expanding is area of activity. The objective now is to continue with our expansion plans for the brand and to impact new markets”, he says.

This entry was posted on Monday, July 9th, 2012 at 07:55 @371 and is filed under DailyDOOH Update. You can follow any responses to this entry through the RSS 2.0 feed. You can leave a response, or trackback from your own site.