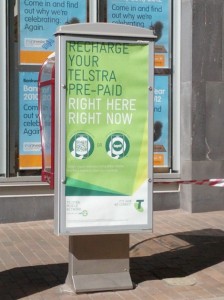 With one tap, customers are instantly taken to the relevant page on their mobile screen.

Jamie Conyngham CEO of Tapit told us “Telstra is innovative, they are the first major brand in Australia to launch such a comprehensive NFC initiative in retail and outdoor simultaneously. It’s all about making it easier for people to get the content or service they want instantly on their mobile phone. Reducing the amount of clicks or keystrokes simplifies the process and has a positive impact on sales and customer loyalty.”

Telstra, Tapit and JCDecaux have also enabled around 20 phone box advertisements across Sydney and Melbourne, so Pre-Paid customers can easily recharge with one tap on the Tapit symbol.

Jamie Conyngham added “It’s an exciting time. We’re only just scratching the surface of what rewards NFC will deliver brands and consumers”.

This entry was posted on Tuesday, September 25th, 2012 at 07:58 @373 and is filed under DailyDOOH Update. You can follow any responses to this entry through the RSS 2.0 feed. You can leave a response, or trackback from your own site.