With less than 50 days left until U.S. presidential Election Day, Rock the Vote‘s ‘We Will’ out-of-home media campaign aims to defy voter suppression efforts in the home stretch. 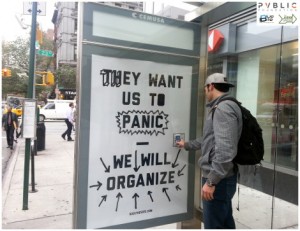 Pending or passed legislation in 20 states will make it harder for young people to vote. (We understand that the laws vary, but deal with such things as prohibiting out- of-state college students from voting, those who don’t have licenses, etc.. And, we are told – although we can’t confirm this – the laws tend to mainly affect voters that lean towards voting Democrat.)

Launching in key states and nationwide, the ‘We Will’ campaign educates young people about these changes and reminds them of their collective power.

The campaign combines messages with photography and graphics and includes Near Field Communications (NFC) interactivity from Blue Bite, a mobile marketing innovator specializing in location-based campaigns. The campaign’s objective, creatively rendered by TaskForce and Apartment One, is to motivate youth to vote and shape the future, rather than merely accepting it.

Over its 21-year history, Rock the Vote has always sought to galvanize the youth vote in ways that have resonated with each generation.

“We recognized that thought-provoking content, whether static with mobile layering on the street or digital in place-based venues, would invigorate ‘We Will’ in the most perceptible way,” says Heather Smith, president of Rock the Vote. This year, the organization has invested in their biggest traditional and digital out-of-home campaign ever, incorporating billboards, NFC-layered bus shelters, phone kiosks, wild postings, taxi tops, college shuttle buses and digital screens in high-visibility areas.

Blue Bite’s proprietary mTAG platform is expected to play a prominent role, powering bus shelters with NFC, allowing smartphone users to connect with the interactive campaign by tapping or scanning the mTAG enabled posters to immediately register to vote, without having to download external applications.

“We’re incredibly excited to work with PVBLIC Foundation and The Judge Group to advance Rock the Vote’s goals,” said Mikhail Damiani, CEO and co-founder of Blue Bite. “NFC is a powerful tool to engage consumers in a personal way by combining out-of-home media messaging and smartphone capabilities, and the use of innovative technology is an excellent way to target Rock the Vote’s core constituency – younger voters.”

“We at PVBLIC believe in empowering organizations to convey their messages,” says Sergio Fernández de Córdova, chairman and co-founder of PVBLIC Foundation. “Toward that end, we have a strong track record of successfully aggregating media toward groups and causes. We strongly believe in the power of media. Most recently, PVBLIC aggregated an unprecedented amount of media for the Rock the Vote campaign in an effort to help promote the group’s bold message of youth empowerment to vote. We are proud to be working with The Judge Group to architect the media strategy and planning for this campaign, and we anticipate other successful collaborations in the future. Additionally, we are pleased to work with Blue Bite, an organization that provides the capability to deliver relevant, rich media messages that will resonate with younger voters.”

“We segmented and integrated the most dynamic media platforms of our day to harness the power of traditional out-of-home’s 24/7 presence and digital out-of-home’s supreme flexibility in real-time for current issues this Election Year,” says Anne Judge, founder and managing principal, The Judge Group. “Layering NFC technology atop bus shelter posters with a trusted company like Blue Bite aligns with youth voters’ aptitude as early adopters and on the go lifestyle. It also allows us to switch the mobile engagement message midway through posting from ‘register to vote’ to ‘vote.’ That’s a welcomed tool when different states have different voter registration deadlines.”

According to Circle (The Center for Information and Research On Civic Learning and Engagement) at Tufts University, ‘Youth voting has been on the rise in the past several election cycles. Youth (18-29) voter turnout rose to 51% in 2008, an increase of two percentage points from the 2004 Presidential election. However, youth voter turnout still lags behind turnout of those over 30 years old.’

The ‘We Will’ campaign runs for eight weeks leading up to Election Day with impression levels that exceed 297 million today and is expected to continue to grow as more out-of-home companies step up to partner.

This entry was posted on Wednesday, October 3rd, 2012 at 14:00 @625 and is filed under DailyDOOH Update. You can follow any responses to this entry through the RSS 2.0 feed. You can leave a response, or trackback from your own site.