Tokyo was just revealed as number one by the Economist Intelligence Unit‘s list of the world’s most expensive cities in 2013, but that’s no reason for not doing business there. In fact, Tokyo is an absolute hotbed of digital signage business that cannot be ignored. 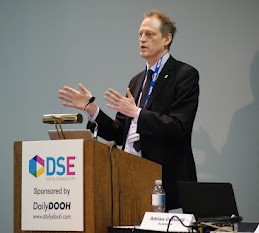 I missed hearing Neil van Wouw, CEO of Vanten K.K. Digital Signage Services, speak at last year’s Digital Signage 360 – A Global Perspective session, but he must have been good because he has been invited back – he was excellent, Ed.

This year he’s bringing a raft of completely new information with him that absolutely no one else in the industry could possibly have, as explained below.

Like last year, Digital Signage Expo and DailyDOOH have joined together to produce this one session at #dse2013 that gives a perspective on what is happening in Digital Out-of-Home in other parts of the world. As mentioned in previous articles, we’ll have great information on the Philippines from Bing Kimpo, CEO, Bing Kimpo Media/Communications and Mariusz Orzechowski, president of the Polish Digital Signage Association, as well as director of sales and marketing CEE, NEC Display Solutions Europe, among others.

Van Wouw’s talk will be centred on a report on the Japan Digital Signage and DOOH market like you have never heard before.

Yes, there are market research reports that do broad industry surveys, but this is the first time an insider in the Japan market has personally gone around and talked to nine other key players in the market and asked for their candid views on where the market is now, what key events transpired in 2012, and what’s in store for 2013 and beyond.

That’s exactly what Van Wouw did and the information he got was ‘straight from the horse’s mouth’ as the saying goes. These nine key players were willing to share their views representing DOOH media, location owners, network operators, consulting, software, content, service providers and integrators. Attendees at this session will come away knowing who the top 10 players are and what they do. As well, they’ll get a concise snapshot of the market and where its going, distilled from interviews with these key players.

If you want to know what’s what with Digital Signage in Japan then this is your one stop ticket to finding out. For this exciting international session, attendees can register here.

This entry was posted on Sunday, February 17th, 2013 at 16:03 @710 and is filed under DailyDOOH Update. You can follow any responses to this entry through the RSS 2.0 feed. You can leave a response, or trackback from your own site.