ChalkboxTV. How The ‘L’ Did That Get There?

We hadn’t played with L shape graphics for a while (usually the domain of the music provider to pubs, clubs and bars) but with the imminent arrival of a ChalkboxTV in our office we are back in the groove of creating some exciting content in another ‘non-usual’ shape†. 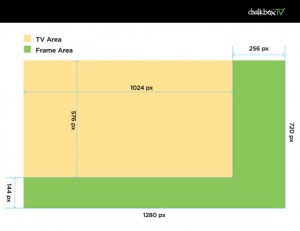 We’ve been excited about some of the possibilities of this (sort-of recently new) product that first appeared back in March 2012 at #dse2012 in a now defunct deal between DIRECTV and RMG Networks.

What we believe was initially an RMG Networks in China ‘skunkworks’ project may have had a bit of a false start with DIRECTV but has in the end resulted in an impressively simple solution for some bare-bones type of installs.

We came up with a way to use a couple of these to show in a client’s reception area, a mix of TV and world clocks (showing various time zones around the world). I’ll share that idea with readers when the project goes live – I mention it here, just to say, that with a little thought something that outwardly looks quite simplistic can be used to great creative effect.

The ChalkboxTV platform is an App based platform that consumes and displays HTML5 content – the TV portion is basically done as an overlay of TV content on top of the HTML frame.

The solution today will accept JPEG, GIF and PNG pictures (and we are hoping that they might be able to support animated GIFs in the future – though there is no guarantee of that). There’s also from what we saw at #dse2012 a nice pre-defined dissolve transition from picture to picture.

ChalkboxTV has not (yet) been certified for use in the UK (we might need to think about the HDMI input, and the power requirement for the box is 100-240 50/60 Hz) but are looking forward to sharing with you some of our more creative ideas once we get everything up and running!

† Alex Hughes will be talking about ‘Content, Shape And Gigapixel Challenges‘ at the Thought Leadership Summit: Video Walls Unplugged, part of the #NECshowcase in London on 16 May. You can register for free here.

This entry was posted on Wednesday, May 1st, 2013 at 13:02 @585 and is filed under DailyDOOH Update. You can follow any responses to this entry through the RSS 2.0 feed. You can leave a response, or trackback from your own site.