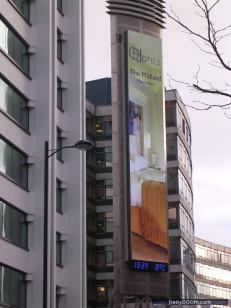 City Gateway Media (CGM) has been running some interesting campaigns on its giant LED screen in Manchester.

The first was for the Midland Hotel (shown above, from the ‘still’ you can just make out the hotel bedroom and their logo) and another was for Monarch Airlines.

Within a 150 metre radius of the screen there are numerous hotels; Abode, Malmaison, City Inn, MacDonald, The Place (apartments/hotel) and the Midland.

The spot was 25 seconds in length and created by Amigo Digital.

Monarch Airlines initially took the screen on a two day trial period in September 2007 but were so impressed with the results they are currently running a new 20 second commercial at the moment until the end of this month.

This entry was posted on Tuesday, January 15th, 2008 at 14:03 @627 and is filed under Scuttlebut. You can follow any responses to this entry through the RSS 2.0 feed. You can leave a response, or trackback from your own site.