Nokia and the London art gallery Tate Britain were brands named as successful at Ocean Outdoor’s annual Art of Outdoor Digital competition, which celebrates pushing the creative boundaries in digital out of home advertising.

The winners were announced at an awards ceremony at London’s IMAX cinema before an audience of more than 400 guests from the UK’s media, creative and advertising sectors. 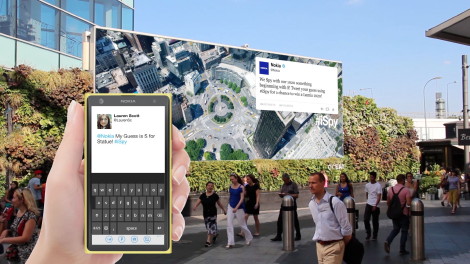 “This competition recognises and rewards new ways of thinking, digital out of home providing both the canvas and the palette to express these new creative ideas,” says Tim Bleakley, Ocean Outgdoor’s CEO. “The number and quality of entries this year helped to create an exceptional shortlist, reflecting the creativity community and media businesses growing love for digital out-of-home. Our winners are striking in the strength of their highly visual ideas combined with great use of technology and they deserve to be recognized for the immediacy and relevance to their target audience.”

Rich Sutcliffe, digital development director at Brand Republic, which partners Ocean Outdoor in the competition, says, “What really comes through in this year’s competition is the importance of integration and collaboration in a highly visual medium which offers incredible flexibility through its data and technology.”

The winners share a prize fund of £450,000 across Ocean’s premium outdoor sites.

All winners and a creative showcase of all the entries can be seen here.

This entry was posted on Friday, October 11th, 2013 at 04:02 @210 and is filed under DailyDOOH Update. You can follow any responses to this entry through the RSS 2.0 feed. You can leave a response, or trackback from your own site.