At DSE I got my own first hand look at Samsung’s touchscreen vending machine (that first debuted at CES earlier this year). The hardware is by Samsung and software by Sapient). The vending machine was cool and very sexy (when it worked) but methinks perhaps that Samsung has “jumped the shark” with this overall product concept – I guess they figured they’d sell a bunch of 50″ LCD touchscreen with every Coke vending machine, Ed

First of all – to set the record straight – I will freely admit to being the poster-child for tech early adopters. Please keep that in mind as you read this post.

Don’t get me wrong – Samsung makes very good display technology and granted, they have some smart folks working for them, but what the hell happened here? Did someone at Sapient convince them that this was ‘cool’ ???

I find it ironic that at this very show – Paco Underhill said in his keynote “anything cool (in digital signage) is linked to uncool”. He went on to explain that what may be cool the 1st or 2nd time (as in, the user experience) – dramatically drops the cool factor after the 5th or 6th time.

Imagine this – you’re thirsty, its been a long day of shopping the mall. You walk up to this ‘cool’ vending machine, it’s running an attractor loop, flashy MTV-like graphics and a hip-hop soundtrack. 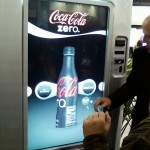 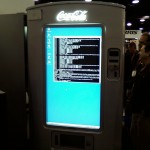 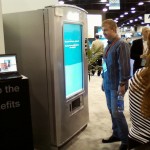 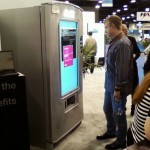 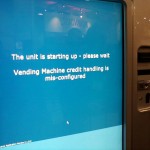 You touch it – looking for that VEND button but feel forced to fumble about and explore the interface – you’re thinking to yourself, what is so great about this virtual product that I can play with?

I’m thirsty and I want this experience to end so that I can get my hands on a real bottle of Coke bottle AND now imagine THAT you engage the unit in this manner every single time you want a drink.

You think out loud and mumble “not good”, and there goes the ‘cool factor index dropping down to zero.

The point I am trying to make is that you are accustomed to using a vending machine – folks will want to use it to get a drink, if they are out and about and want to play a game they’ll likely use their phone or their iPod.

I did some work with ATM machines back in the late 90’s – the ‘brand’ inserted short commercials during the brief pause in processing needed for the ATM to verify the transaction.

Although the overall wait time didn’t change at all, research told us that the viewer’s perception was that the bank was intentionally slowing down the delivery of the customer’s cash in order to get them to watch the promotional items.

Again, nice the first time but not so much every time after that. You observe the same problem with On-line advertising , today’s consumer is ruthless at filtering out information that is not important to them, they don’t want to wait for their payoff THUS the problem with pre-roll ads on streaming videos – anyone remember the pop-up ad?, Ed

Aside from the user experience issue, the addition of the LCD touch screen plus the software that interfaces with the vending unit seemed to cause a number of problems at the show – take a look at the photos above taken at DSE and you can see that it crashed, and err crashed, and errr crashed.

At least the ‘analog’ machines have been around long enough to have worked out all their bugs.

At CES Samsung announced that this technology was going to be installed in some US Simon Mall locations in 2010 – that’s kind of scary considering that it’s this late in the game and the machine can’t even stand up to a trade show crowd. I really felt bad for the guy in the booth that had to manually RESET the unit every time someone selected something that was ‘sold-out

Like i said, as much as I thought this concept was cool, I question the operational scalability of the application.

Show me how the total cost of ownership of a digital vs. analog version of a vending machine will pay off the difference in costs?

Ah ha, here’s an idea  – there’s always advertising!!! – perhaps you run ads on it and charge advertisers to help off-set the additional costs?

Hmm… I think we’ve all heard that one before 😉

This entry was posted on Wednesday, March 4th, 2009 at 16:35 @732 and is filed under DailyDOOH Update. You can follow any responses to this entry through the RSS 2.0 feed. You can leave a response, or trackback from your own site.