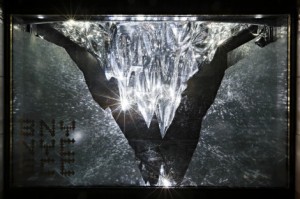 Christie have again partnered to bring a traditional family shopping experience in a ‘bricks and mortar’ setting, creating magical windows and an in-store gallery through the use of visual technologies.

“Barneys New York had an overwhelmingly positive response from customers and designers last year to our holiday windows, which have become known for their innovative use of immersive and interactive narrative with cutting-edge technology that leads people into our store,” says Freedman. “Last year, Christie was instrumental in the success of our holiday display. With a musical, fashion and business innovator like Carter, we were confident that Christie’s superior technology and the expertise of its Managed Services team could help us bring his vision to light, not just to our store in Manhattan, but also to select flagship locations in other major cities.”

Tommy Dobrzynski, vice-president of visuals at Barneys New York, says, “Everything that encompasses ‘A New York Holiday’ – the items chosen, the amazing designers that participated, the windows, the design of the BNY SCC Gallery, the Christie technology and their team’s unique ability to help us leverage technology to achieve our creative vision – represents a perfect example of groundbreaking collaboration that I hope will WOW customers and passersby.” 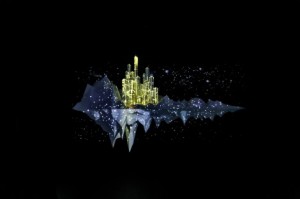 The third floor of the retailers’ Madison Avenue Flagship has been transformed into the BNY SCC Gallery, an immersive 1,200-square-foot space with a seamless 360-degree projection that utilizes projection mapping, exclusive content, lights, and movement, to transport customers into the world of New York. A 70’ long hall with floor projection guides visitors from the third floor elevator to the Gallery. The BNY SCC Gallery Space showcases limited edition products designed by Carter in collaboration with various designers, all available for purchase.

The retailer’s iconic Madison Avenue windows captivate passersby and customers with moving content that demonstrates how light and shadow are experienced in New York City, incorporating theme colors of black, white and gold. Among the highlights are a ‘floating city’ projected upon a 16’ tall ‘rock’ wall, which houses the viewing area for the projection mapped experience, and includes twinkling stars in a night sky and a slow-moving sunrise revealing the shimmering floating city – enhanced by a visual program that incorporates architectural language, changing geographical landscapes and climate (snow, rain) – all through dazzling 3D mapping technology.

A large, abstract hanging resembling a rock or icicle formation is covered with thousands of fragmented mirrors. With Christie projection mapping washing light over the formation to create a light show on the object itself, it will be reflected into the room as well as onto the window and finally the street.

A traditional favorite during the holidays has a modern new twist, with a window housing the ‘BNY NYC Sleigh Ride’ featuring a rotating cast of improvisational performers from Upright Citizens Brigade outfitted in modern Santa costumes who take children on a virtual ‘sleigh ride’ through an abstracted New York City. Through the use of experiential screens, the occupants will feel like they are up in the air and flying through New York. Christie WeatherAll flat panels on the outside of the window show images of the children and Santa as they take the Sleigh Ride. 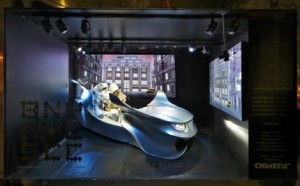 “New York is home to some of the most technologically sophisticated customers in the world, and the holidays are an especially competitive time for retailers to capture their attention and bring them into their stores,” says Sean James, vice-president of Christie’s Managed Services. “Through visual technology and collaboration, Christie helped bring the creative vision to life.”

“Barneys is demonstrating the possibility of taking a creative merchandising concept, marrying it with advanced visual technologies and deploying it on a varying scale in regional stores across the country,” says James. “We were happy to work with the creative team to find solutions that would work in each of their five locations, from the larger Manhattan flagship store, to the smaller locations.”

To get everyone into the holiday spirit, one Christie Facebook follower will have the opportunity to win a $1,000 Barneys gift card (redeemable online or in-store), courtesy of Christie and Barneys. Visitors can see details on Christie’s Facebook page Nov. 29 to Jan. 3.

Barneys New York is a luxury specialty retailer for men, women and the home renowned for having the most discerning edit from the world’s top designers. developing new and innovative design talent. It operates flagship stores in New York City, Beverly Hills, Chicago, Seattle, Boston, San Francisco, Las Vegas, Los Angeles and Scottsdale plus a preeminent luxury online store, Barneys.com, as well as 25 other stores and outlets across the United States.

This entry was posted on Thursday, November 21st, 2013 at 14:30 @646 and is filed under DailyDOOH Update. You can follow any responses to this entry through the RSS 2.0 feed. You can leave a response, or trackback from your own site.