The Most Northern Touch Info Screen In The world?

We just learned about a two-sided kiosk installed in Saariselkä in northern Finland that is believed to be the most northern touch info screen in the world. 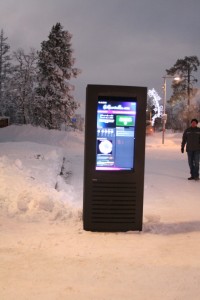 Saariselkä is a popular tourist destination, providing activities such as skiing, hiking and a spa, so GoSaariselkä wanted to publicize information relating to its tourist services and activities.

GoSaariselkä wanted a solution capable of operating in very challenging, even arctic, conditions where temperatures can drop as low as -40 degrees Celsius, so Avek Esitysratkaisut Ltd. was chosen to provide the solution. Two ONELAN Net top box (630 media players are installed driving two 46” portrait screens, one with touch, located on a two-sided kiosk.

By ordering both the equipment and the configured software from the same provider, the risk of any problems occurring was minimized. It has also enabled the system to be installed very quickly, essential when the temperatures are so cold. The kiosk worked instantly, eliminating any need to restart the system in freezing conditions.

ONELAN’s system was chosen because it was considered easy to deploy, its software was expected to be updated regularly, and GoSaariselkä wanted the ability to divide the content into many zones.

The kiosk has now been in operation for a year and operating well, with only a few occasions needing technical assistance from ONELAN.

This entry was posted on Monday, December 9th, 2013 at 06:00 @291 and is filed under DailyDOOH Update. You can follow any responses to this entry through the RSS 2.0 feed. You can leave a response, or trackback from your own site.