When we heard about HELP International’s new combination digital signage-emergency unit, it immediately brought to mind Vital Sign Media, a similar unit for indoors that drew our attention as one of the most interesting items we saw at  DSE back in 2010, so we contacted David Magruder, the man behind that unit. 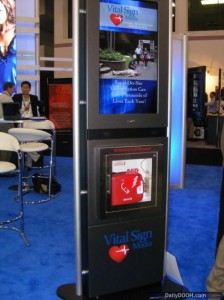 It also offers comprehensive, fully customizable AED management programs and gives full training programs across the U.S. by its own in-house staff who have combined, 250 years of pre-hospital Emergency Service experience.

The company’s clients include, among many others, NASCAR and the PGA Tour.

“At the Vital Sign Media launch and for a long time afterwards, we had a tremendous interest in the concept of Vital Sign which was set up as a separate company,” says Magruder. “We had an agreement with Philips to use its defibrillators and we had all sorts of places that wanted it: campuses, hotels, subways, malls. Some even wanted customized hardware, which we could have done. There was even interest for 400 court systems.

“But it’s a very capital-intensive business, and we needed investors, and everybody played ‘wait and see’. In the meantime, the company put $80,000 in patents and patents pending – not including all the development money – but investors waited and waited and waited some more.” (Even Philips Capital, with which Magruder has a good relationship, didn’t invest or raise hoped-for money.)

“I was drained,” Magruder admits. “It just sucked the life out of me. I finally dissolved the separate company and brought Vital Sign inside Life Safety Solutions. I still have the two prototypes. I kept the U.S. patents but with the cost had to let Europe go, and in the meantime, have been building my company. We are now doing about $2 million in annual business and have no debts, but Vital Sign needs investors.

“My aim is to bring it out in 2014 in the U.S., where we have the patent coverage. The development is already done. All the technology is there. eg. The advertising screen changes automatically to instructions when the defibrillator is needed. I’ll want to talk to software management companies and advertising sales representatives, but first I need investors. One of my thoughts is also to license it out to operators of digital networks in heavily trafficked areas such as airports and malls.”

Investors: are you listening?

This entry was posted on Tuesday, January 21st, 2014 at 16:02 @709 and is filed under DailyDOOH Update. You can follow any responses to this entry through the RSS 2.0 feed. You can leave a response, or trackback from your own site.