#dse2014 @RMGNetworks Now Not Among Exhibitors

RMG Networks’ 2014 Customer Focus this year obviously does NOT include #dse2014.

The floor plan (if we remember correctly) seemed to have them down as being in booth 105 (some 1200 sq ft. in a 30′ x 40′) but when we looked recently, their name had disappeared, replaced with the text ‘DSE’ – a space which will no doubt be quickly sold to someone on the wait list. (Note: A subsequent call into Chris Gibbs confirmed that RMG Networks have indeed pulled out of the show.)

RMG Networks actually have little history with the event, the ill-fated DirectTV / RMG Networks venture back at DSE in March, 2012, and, of course, the Symon pre-acquisition last year.

Our guess is that the powers to be at RMG Networks may have come to the conclusion that a ‘digital signage’ show is not necessarily the best place for them to find customers for everyone. Some, however, may jump to other conclusions, (A word of warning: RMG Networks’ spend elsewhere globally in the industry would suggest that they are not cash poor.)

Some might say that they are surprised that a public company that probably likes to think that it is the 800 pound gorilla and dominant market leader of all things Digital Signage (actually, I’m not sure they have ever positioned themselves that way) would choose to have no presence at the only industry convention that counts. Surely the PR alone is valuable to them?

Now, we are big fans of DSE. It is the only industry get together worthy of the name. However, the problem of getting potential customers to an event is a common one – look closely at what is on offer from exhibitors at DSE and there is REALLY nothing much new on offer. Seriously, you could skip the event for two years and not miss much.

The common complaint from any exhibitor is when something they pay good money to attend turns into a ‘vendor to vendor’ event. 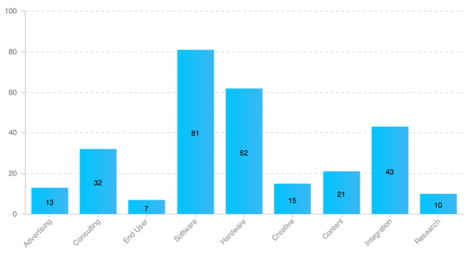 Note (above), only 7 end users at the Preset Mixer† this year

At DSE, we’d say that a lot of the innovation is around the fringes of the core technology, and with the likes of Intel and the display manufacturers taking large stands (not to mention ‘keynotes’) and beating the same old tired drum, is there really that much of an incentive for an end user who came last year to return the next?

I don’t think that DSE will miss RMG Networks that much (if at all) but I do hope that their pulling out gives the organizers some food for thought.

A shift in positioning and marketing might be wise for DSE for next year – and a change in the format of its educational tracks is long overdue.

This entry was posted on Tuesday, January 21st, 2014 at 18:41 @820 and is filed under DailyDOOH Update. You can follow any responses to this entry through the RSS 2.0 feed. You can leave a response, or trackback from your own site.

One Response to “#dse2014 @RMGNetworks Now Not Among Exhibitors”