Oakley, manufacturers of eyewear, ski goggles and outdoor accessories, recently commissioned Montreal-based Moment Factory to design and produce a multimedia environment for the launch of its new Disruptive By Design campaign.

This major event celebrated the Oakley’s legacy and culture of disruption while pointing the way to its innovative future. 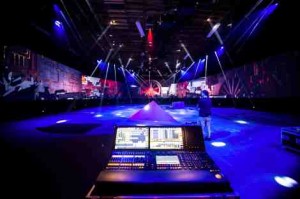 As part of the event, Moment Factory created a room featuring 270-degree projection screens to highlight Oakley CEO Colin Baden’s speech and create an immersive environment for the cocktail reception.

Other interactive rooms allowed guests to reveal the content of wall and floor projections using infrared pointers, which also triggered real-time audio and video effects. Equipped with the ability to interact with the space, visitors enjoyed an exploratory experience in which they discovered the world of Oakley in a completely novel way.

Moment Factory, with 120 employees, produces content for digital signage as well as projection, working with both permanent installations as well as temporary ones for large events and shows. Last fall, the company was commissioned by Los Angeles World Airports at act as executive multimedia content producer for seven installations in the new Tom Bradley International International Terminal. It included hours of original video content and several interactive sequences created with high defintion imaging, 3D and technology that responds in real time to the movement of people and airport information.

The company works internationally and has produced works from on the façade of Sagrada Familia in Barcelona to rock shows for the likes of Madonna, Bon Jovi and Justin Timberlake.

This entry was posted on Wednesday, March 19th, 2014 at 16:00 @708 and is filed under Scuttlebut. You can follow any responses to this entry through the RSS 2.0 feed. You can leave a response, or trackback from your own site.