With Burger Studio, a student in a cafeteria setting starts at a kiosk where he swipes a card, uses a touch screen to order every aspect of a meal, receives a printed coupon from the kiosk, then moves along the queue to pick up the meal.

“The system makes for a cleaner setting and eliminates the need for as many cafeteria staff,” says Scott Koller, executive vice-president and COO at Wireless Ronin. 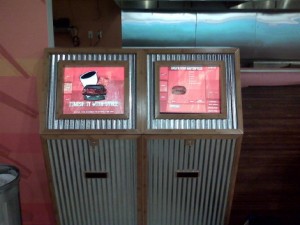 Burger Studio is the first brand created entirely by students for Aramark. Hundreds of students from the campuses Aramark serves across the U.S. helped to create Burger Studio, including the concept, design, name, use of technology and staff uniforms. The Burger Studio name was selected from more than 1,200 entries submitted in an online contest. Student taste testers reviewed all menu items under consideration to ensure that the type of burger, fries and buns would appeal to students.

Wireless Ronin, which developed the touch screen order kiosk, the digital menu system and participated in the creation of the menu and touch interface design – which was based on the visual style created by Aramark – has been working with Philadelphia-based Aramark on the concept for over a year.

Wireless Ronin provides the hardware and RoninCast digital signage software for the digital menu boards and touch screen ordering kiosks. The Burger Studio kiosks allow students to build their own burgers by selecting their choice of Angus, chicken or veggie burgers and customize them with over 30 topping options. As they make selections, the kiosk displays their burgers being built with their topping choices. Burger Studio’s design elements reflect an artist’s palette with graphics depicting ‘masterpiece’ burgers that great artists, such as Picasso, Van Gogh and Warhol, might have created. 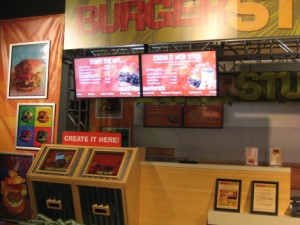 In addition, Ronin has been working with Aramark’s High Education and Healthcare sectors to provide its digital menu boards and/or ordering kiosks to several other universities, a high school, and at least four hospitals and medical centres.

“Aramark is now offering this as part of its package as contracts come up,” says Koller.

While both Wireless and Ronin and Aramark also have offices in Canada, all their joint efforts are so far seen only in the U.S..

Aramark is a leader in professional services, providing award-winning food services, facilities management, and uniform and career apparel to health care institutions, universities and school districts, stadiums and arenas, and businesses around the world. Aramark Higher Education provides professional services to more than 600 colleges and universities throughout North America.

This entry was posted on Thursday, November 5th, 2009 at 09:03 @418 and is filed under DailyDOOH Update. You can follow any responses to this entry through the RSS 2.0 feed. You can leave a response, or trackback from your own site.