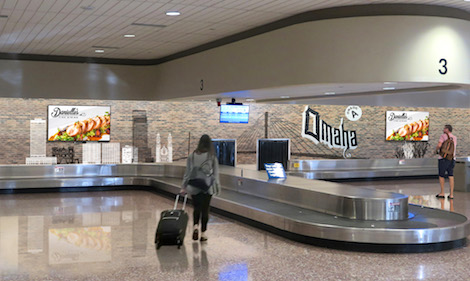 This agreement continues a relationship that began in 2009 when Clear Channel Airports invested nearly a half million dollars in deployment of first-to-market digital media to OMA. Through this investment, and a robust go-to-market sales strategy, Clear Channel Airportsnearly doubled the annual revenue of the previous concessionaire during the course of contract term.

Located four miles from downtown Omaha, OMA is a medium-hub airport that served over 5 million passengers in 2018. According to the Omaha World Herald, more people than ever used OMA last year, as airlines offered additional service to new destinations, such as the west coast. Eppley is among the country’s fastest-growing airports in capacity, or the number of seats available for purchase. Among the 61 largest U.S. airports, Eppley ranked No. 17 in capacity growth in 2018, clocking a 7.3 percent rise from the previous year.

OMA offers advertisers the opportunity to connect and engage with a diverse group of travelers including leisure, business and local residents. Omaha is home to nine Fortune 1000 companies and is a regular stop for various NCAA activities (including post season tournaments). The city hosts the College World Series every year, the Olympic swim trials and the Annual Berkshire Hathway annual shareholder’s meeting, which attracts over 40,000 shareholders from around the world.

Morten Gotterup, president, Clear Channel Airports said “We’ve been Eppley Airfield’s advertising provider for over 10 years and we’re proud to call them our strategic partners for another three years,” said With its impressive passenger growth, OMA remains a top choice in the Midwest for brands to reach their audiences via our state of the art media network. We’re excited to work with OMA to develop new offerings for advertisers to reach business travelers and local residents in this vibrant city.”

Eight airlines provide approximately 88 departures per day to 34 nonstop destinations from Eppley Airfield. The airport is embarking on a complete terminal modernization and expansion project to enable them to consolidate the TSA checkpoint, consolidate arrivals, move more food, beverage and news and gift concessions beyond the checkpoint and add additional gates.

OMA’s new ad program with Clear Channel Airports will achieve a goal of providing an aesthetically pleasing environment that reflects contemporary advertising and optimizes space for marketing effectiveness and revenue generation. Some new program details include:

Introduction of program-wide branding of the Omaha cityscape inspired by the beauty and charm of The Old Market;

Dedicated to airport advertising for close to 45 years, Clear Channel Airports is the premier innovator of contemporary display concepts. The Company, a brand division of Clear Channel Outdoor Americas (NYSE:CCO), one of the world’s largest outdoor advertising companies, currently operates more than 260 airport programs across the globe and has a presence in 28 of the top 50 U.S. markets with major airports.

This entry was posted on Tuesday, May 28th, 2019 at 15:27 @685 and is filed under DailyDOOH Update. You can follow any responses to this entry through the RSS 2.0 feed. You can leave a response, or trackback from your own site.