Kinetic, the UK’s leading Out-of-Home media agency, and WPP media agency Wavemaker, have partnered with L’Oréal to launch YSL Beauty’s bold new fragrance, Libre, with a captivating immersive campaign. The launch is the biggest for the beauty brand since it released its best-selling perfume Black Opium in 2013. 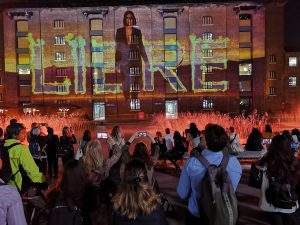 Passers-by will be able to indulge in a 360-degree sensory experience at Granary Square, featuring aural and visual elements, as they become acquainted with the world of Libre – where boundaries are made to be broken, and anything is possible.

In a beauty-sector first, the pioneering Out-of-Home campaign will feature a combination of projection mapping on the building’s façade and LED-controlled water fountain displays, overlaid with alluring audio as the iconic YSL logo appears, followed by the distinctive geometric perfume bottle.

The imagery will then give way to the latest broadcast advert for Libre, starring multi-award-winning recording artist Dua Lipa as its face. Beginning with messages of “freedom” – which the scent embodies – passers-by will be able to experience the advert at scale, immersing themselves in the captivating audio and visuals as they unfold before them.

The campaign will also feature gifting opportunities, with samples of the scent available to members of the public within Granary Square. The first projection show will take place at 7.30pm on 26th September, playing at intervals of 20 minutes throughout the evening.

Emily Byrne, General Manager, YSL Beauty UK&I, said “We wanted to create a stand-out, best-in-class brand expression that showcased the YSL Libre fragrance, whilst also embodying what YSL Beauty stands for as a young, edgy, luxury brand. This is a first within the beauty sector, and the projection pushes the boundaries of what is possible with Out-of-Home media. We hope this will be a truly surprising and memorable event for the consumers who see it live, as well as those who experience its amplification online across YouTube and other social channels.”

The campaign strategy was managed and implemented by Kinetic, supported by media delivered by Wavemaker, and projection designed and delivered by Projection Artworks.

This entry was posted on Friday, September 27th, 2019 at 08:07 @379 and is filed under DailyDOOH Update. You can follow any responses to this entry through the RSS 2.0 feed. You can leave a response, or trackback from your own site.