Yahoo’s Global Head of DOOH Stephanie Gutnik is chairing not one, not two but three (3) AdTECH: OOH Conferences this year in North America.

First up is Miami which will take place during #MiamiTech week, i.e the week of April 11-17, 2023 – most likely on the Wednesday afternoon of that week, this will run alongside the MMA PossibleEvent, a DPAA Latam DOOH event, some OAAA activities, Co-Motion and eMerge Americas.

Toronto will follow on May 24, the day before the new COMMB awards. We worked hard at persuading the Digital Signage Federation to move their Toronto, May 4th Meet ‘n Mingle to join COMMB and ourselves but (so far at least) to no avail.  You can after all lead a horse to water but not make it drink.

Stephanie leads Yahoo’s DOOH team, and is responsible for defining overall strategy, product feature set and go-to-market plans for all DOOH efforts globally. Before joining Yahoo she spent two years as Vice President, Digital Strategy and Programmatic Sales at OUTFRONT Media and before that she was with Broadsign for six and a half years, rising to the position of Vice President, Business Development. 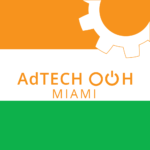 Since 2016, Stephanie has been instrumental in helping the Ministry of New Media in formulating their successful AdTECH: OOH Conference series of events.

This entry was posted on Thursday, February 2nd, 2023 at 15:23 @683 and is filed under Events. You can follow any responses to this entry through the RSS 2.0 feed. You can leave a response, or trackback from your own site.