Media Displays, who claim like so many to be “one of the leading providers of outdoor mobile digital advertising” has appointed high profile entrepreneur and star of Channel 4’s ‘The Secret Millionaire’, Carl Hopkins, as a non-executive director. Media Displays’ products include TV advertising vehicles that feature 3 x 2m LED screens 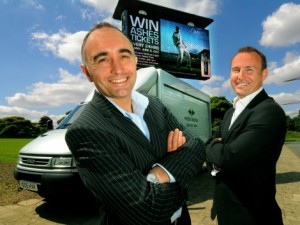 Established in 2004, Media Displays’ TV vehicles have already been used as part of campaigns for some of the UK’s best-known brands, including most recently for Sure deodorant at cricket matches, for Digital UK as part of the campaign to raise awareness about the nationwide switch over to digital television, and for Warner Music to promote the new album of one of its bands ‘The Enemy’.

Ian Taylor, managing director of Media Displays told us “Carl has an enviable record of success in the world of advertising and marketing and we are looking forward to benefiting from his expertise and experience in branding and creating business growth, and being introduced to his impressive contacts in the industry.”

Media Displays is based in Horbury, Wakefield, and its turnover has increased by 25% year on year since the company was formed.

Carl Hopkins commented “I was incredibly impressed with Media Displays – particularly with the technology used for the TV vehicles, its quality service and its potential for growth. I’m very confident that we can capture a very strong position in the market and take the company to even further levels of success.”

This entry was posted on Monday, August 24th, 2009 at 06:58 @332 and is filed under DailyDOOH Update. You can follow any responses to this entry through the RSS 2.0 feed. You can leave a response, or trackback from your own site.