JCDecaux has won a tender for Queensland Rail which will see it significantly expand its current portfolio, retaining existing formats and adding new digital assets and locations across Australia’s second largest state. 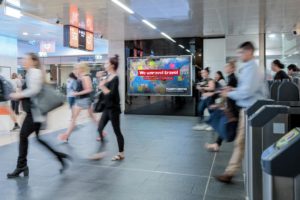 Steve O’Connor, JCDecaux CEO, told us “Queensland is poised for further economic vibrancy as it begins its preparations for the 2032 Olympics. Our expanded station and digital presence will provide brands a wealth of new advertising opportunities to connect with its growing population.”

JCDecaux has been providing advertising solutions to Queensland Rail for over ten years, with the new 10-year contract commencing in July 2022. The extended and expanded agreement will see JCDecaux add 13 new roadside JCDecaux digital large format sites and six digital bulkheads in various locations. The addition of bulkhead formats to the JCDecaux Queensland Rail portfolio means that for the first time, advertisers will have access to consistent advertising opportunities across the entire Eastern Seaboard, from Sydney Trains through to Queensland Rail.

The ten-year contract has an option to extend beyond 2032. Work on the new assets will commence shortly.

This entry was posted on Friday, May 6th, 2022 at 11:46 @532 and is filed under DailyDOOH Update. You can follow any responses to this entry through the RSS 2.0 feed. You can leave a response, or trackback from your own site.