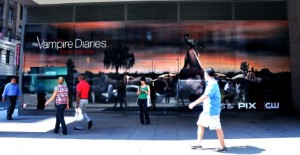 The Storescape campaign uses three premium Inwindow properties in Los Angeles and three in New York City and features a range of interactive technologies to engage the pedestrian, including augmented reality and Bluetooth.

Steve Birnhak, CEO, Inwindow Outdoor told us “We continue to assert our leadership in the storefront advertising space by demonstrating again that there are no limits to what we can do with an empty storefront, technology and creative thinking, particularly for media companies who are competing so fiercely for viewers,”

As we have stated (and shown several times before) the value of a captivating street-level or mall display is undeniable. Recent displays using similar technologies, like Inwindow Outdoor campaigns for Coraline and Sprint, have proven to be extremely successful.

We’d expect that this CW campaign will yield similar results.

Vampire Diaries is a new series that premiered on CW Networks in early September. The story centers on a high school girl and two warring vampire brothers vying for her soul.

Playing on the concept that vampires don’t have reflections, pedestrians who approach the Inwindow Storescape will initially see their likeness on a screen. Shortly thereafter, a black crow approaches the viewer, circling around the viewer’s head before flying off. The screen then flashes momentarily and the image of the viewer vanishes while the background scene – other pedestrians, cars, etc. – remains. A trailer of the show then launches on the screen and the pedestrian is sent a message to their mobile device, via Bluetooth, that allows them to view the trailer on their phone.

This entry was posted on Wednesday, September 23rd, 2009 at 06:45 @323 and is filed under DailyDOOH Update. You can follow any responses to this entry through the RSS 2.0 feed. You can leave a response, or trackback from your own site.

One Response to “The Vampire Diaries”