Will The Largest In-Store TV Network Ever Happen?

As a few industry commentators have already written, the 7-Eleven Inc. folks have been looking at a digital signage network for some time, see Dave Haynes ‘DDN announces plans to roll out massive digital signage network with 7-11‘ and our very own Manolo Almagro’s ‘Déjà vu 7-11’s In-Store TV Network‘ that traces its history back some ten years! 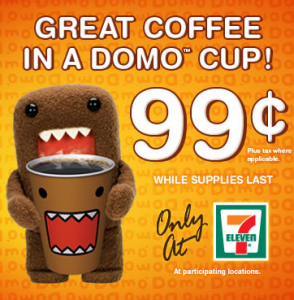 This week’s press release stated rather triumphantly the creation of “one of the nation’s largest out-of-home digital networks” citing (upon its full national deployment mind) the 6,200 7-Eleven stores throughout the United States and Canada and the expectation in reaching an estimated 190 million monthly viewers.

Digital Display Networks is providing all of the turn-key services, supervising installation, content production and advertising sales AND paying for the whole network to be deployed which will have to cost something like USD 60 – 70 million. Surely that issue of cost must be issue number 1.

Issue number 2 is that 7-Eleven have no ‘skin in the game: – whilst everyone seems to agree that 7-Eleven and DDN have done a good job in looking at a variety of solutions and all of their options, the retailer is obviously rubbing its hands together with glee and dreaming of a free network AND big fat ad revenue cheques coming in!

Issue number 3 is that 7-Eleven are hardly one of the most innovative convenience store chains – you need to look at folks like Sheetz for innovation.

Issue number 4 is that some of the franchisees that 7-Eleven have around the USA can barely keep their stores clean. What’s going to happen when you try and add in screens and heaven forbid something goes wrong with them or they get turned off?

Issue number 5 is that in the USA, C-stores have very small levels of traffic and the sitelines are typically not good BUT of course a network operator still has all the costs of deployng a network across a wide geography.

The last issue (number 6) is probably the worst. DDN, although well experienced with advertising driven networks in their hotel deployments will struggle we believe to get any meaningful media sales revenue from the network. As Dave Haynes says (he has a way with words) “C-stores are really, really tough environments because of the speed at which people are in and out of there. The only c-stores where I have seen people hanging around are those being robbed, or equipped with slot machines”.

He adds “Limited dwell times means short programming/ad loops, which somewhat restricts the media sales opportunity” and of course he is spot on. Without access as well to 7-Eleven co-op funds (or any ‘real’ 7-Eleven buy in – as witnessed with the original JCDecaux media sales on TescoTV situation in the UK) DDN will undoubtedly struggle to sell enough media at the right price to cover their costs on the network AND guarantee 7-Eleven any revenues.

We are not saying that this deployment cannot be done but to date, we have not seen any really successful large-scale deployments in the C-store sector in the USA and nothing in this announcement makes us think this will be any different.

Our guess is that this (announcement) will NEVER emerge as a nationwide deployment at 7-Eleven – at best it’s likely to be a set of regional / local deployments where the screens would appear only in the 7-Eleven stores owned by the more creative and innovative franchisees.

Digital Display Networks (DDN) is a digital network provider that creates and installs digital networks, produces and manages all content and administers advertising sales to provide a singular digital signage solution at point of purchase. DDN was formed by the principals of Explorer TV (www.explorer-tv.com), the nation’s largest in-hotel digital visitor information TV network servicing over 150,000 hotel rooms in major cities in the U.S. and Europe, as well as cruise ships, visitor information centers and airports. Founded in 1992, Explorer TV was a pioneer in place-based media where advertisers are integrated into network content. All of Explorer TV’s content is 100% advertiser supported.

This entry was posted on Wednesday, November 4th, 2009 at 16:44 @739 and is filed under DailyDOOH Update. You can follow any responses to this entry through the RSS 2.0 feed. You can leave a response, or trackback from your own site.

One Response to “Will The Largest In-Store TV Network Ever Happen?”