Toronto Gets A Breath of Sea Air 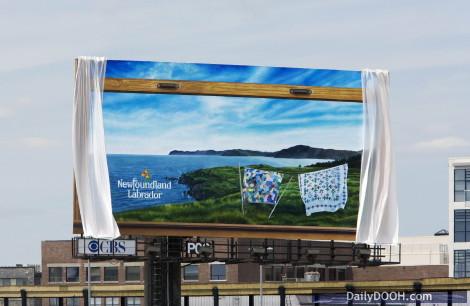 Toronto has gained a breath of fresh air all the way from Newfoundland and Labrador.

A giant work of art has unfolded above Toronto’s Gardiner Expressway over the last three weeks as part of Newfoundland and Labrador’s Fresh Air campaign to tempt travellers to visit Canada’s easternmost province.

Now completed, the three-dimensional window superboard that features actual curtains ‘blowing from a Newfoundland and Labrador fresh sea breeze’ is attracting the attention of commuters and tourists traveling one of Toronto’s most traveled routes.

Rather than using standard advertising methods, the stunning Newfoundland and Labrador scenery seen through ‘the window’ was hand-painted by an artist hanging 60′ above the busy highway.

The campaign conveys the experience of visiting the province by displaying some of Newfoundland and Labrador’s iconic qualities. The open window represents an escape to a place that’s different: free from smog and stifling temperatures, it’s a place filled with fresh air, natural beauty, and creativity.

“Newfoundland and Labrador is an ideal location for a change of scenery,” says Hon. Clyde Jackman, Minister of Tourism, Culture and Recreation for the province. “We are excited about this new addition to our campaign. It’s something we’ve never done before. The best way to communicate a message to people is to show them, rather than simply tell them. That’s what this superboard is all about.”

The superboard will run until mid-August. It stands opposite the busy Canadian National Exhibition grounds.

This entry was posted on Wednesday, July 16th, 2008 at 06:00 @291 and is filed under Scuttlebut. You can follow any responses to this entry through the RSS 2.0 feed. You can leave a response, or trackback from your own site.