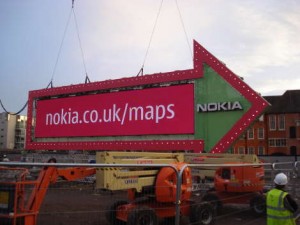 Always first with stories, Manolo Almagro made mention of this in a post back in the middle of February but Lighthouse just released a press release and so we thought we would give it another quick mention.

Flying 35m in the air for up to 11 hours a day, late 2009 saw a large format Lighthouse LED screen play a major role in a promotion for mobile phone giant Nokia’s Ovi maps service and entertained thousands of Londoners in the process.

Taking place over a two-week period, the 14 x 4 panel (14.22m x 3.04m) Rn7-ER 7mm screen was suspended from a crane in the city’s Potters Fields Park, near Tower Bridge – mounted in a frame forming a giant arrow. 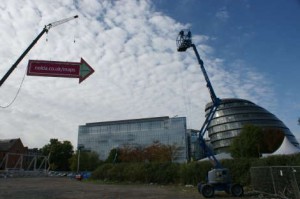 Passers by were encouraged to send a text message, which would be displayed on the screen along with the sender’s distance, calculated by Ovi maps positioning technology – also using that technology, the crane would be instructed to rotate and point the arrow in the direction of the sender.

Pod Bluman of Bluman Associates devised the technical solution from an original idea by Nokia’s creative department and production was managed by Neil Keane of EPMD.

Pod Bluman told us “The combined weight of the arrow frame and screen was approximately six tons. The crane and rigging companies set a wind speed limit, and if the wind went above that speed we had to drop the structure. But the Rn7-ER screen was great – pretty much perfect.”

Another challenge was that the screen’s feed had to be transmitted over 120m of cable,.

Culminating in a competition for Alexandra Burke to play a show in any UK town or city – ultimately won by Peterhead in Scotland – the Ovi maps promotion was a great success we are told.

Perhaps one measure of ‘success’ could have been how many text messages were received compared to how much all of this cost. No mention of either in the press release but to be fair that is not Lighthouse’s angle (or care) here.

This entry was posted on Friday, March 5th, 2010 at 10:00 @458 and is filed under Scuttlebut. You can follow any responses to this entry through the RSS 2.0 feed. You can leave a response, or trackback from your own site.