It seems that QR codes are catching on in Canada but not always on digital screens. This interesting guerilla campaign involves QR codes on traditional 12” x 18” posters that have been put up by teams in seven cities across Canada: Vancouver, Edmonton, Calgary, Toronto, Montreal, Quebec City and Ottawa. As usual, when a smart phone camera is held up towards the poster, the QR code directs users to sign petitions to help protect Canada’s wilderness. 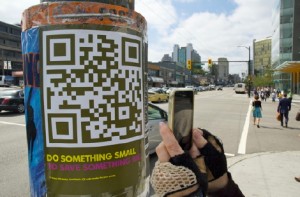 The Big Wild, a three-year-old wildernesss conservation group based in Vancover, launched the campaign with the aim of using mobile technology to help protect wilderness regions at both ends of the country.

Darren Barefoot, program manager for The Big Wild, says, “We’re always looking for new strategies and approaches to get people’s attention. We wanted to try out a campaign with these QR codes and add an element of mystery. The idea was that we would entice and intrigue people. The people who might scan the codes are technologically minded, so they would know about the code and know what to do with it.”

QR codes can store text information, SMS messages or a web addresses. In western cities, The Big Wild poster’s QR code directs people to a campaign to protect the Flathead River Valley; in eastern cities, it refers to the Restigouche Watershed.

Founded by Mountain Equipment Co-op, a retail chain cooperative, and the Canadian Parks and Wilderness Society, The Big Wild is a not-for-profit organization that connects Canadians to conservation campaigns across the country. It calls upon Canada’s political representatives to protect its public land and water.

The campaign posters “will stay up as long as they last,” says Barefoot. “We know the ones outside may only last a few days, but we’re getting some up in movie theatres and cafés, so those could stay up for a couple of months.”

This entry was posted on Friday, September 3rd, 2010 at 08:34 @398 and is filed under DailyDOOH Update. You can follow any responses to this entry through the RSS 2.0 feed. You can leave a response, or trackback from your own site.