Paris Metro Screens – Back To School

Back in Paris for ‘la rentrée’ –  a French tradition which initially meant ‘back to school’ but has become synonymous with ‘back to work’ or ‘back to anything’ – after the traditional one month break in August when everything closes down and Paris is empty apart from tourists (for at least three weeks at least its virtually impossible to get fresh bread). 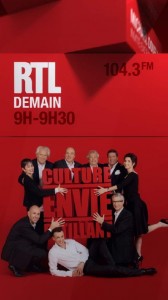 Government ministers are back at their desks and the trade unions are back on the streets having prepared a national strike for Tuesday 7th to defend their rights to retire at 60 (or 55 for some public service workers). So it will be business as usual with schools closed and public transport disrupted.

It’s also time for a whole new series of programmes for radio & television, time to prepare a fresh look to attract a new audience whilst trying to maintain the existing one. France Televisions (4 state-owned channels) has a new boss (more politically acceptable) and RTL, the number one radio station (private, mainly talk) has a bold new campaign which is the first in Paris that takes full advantage of the flexibility of digital screen media.

Coordinated by ad agency Posterscope, the campaign integrates a massive traditional campaign (TV, press, posters) with a digital campaign on the controversial Metro station screens. The damaged screens have all been repaired, and are back in action, though so far the only ads that I’ve noticed have all been static posters, with little or no animation.

Whilst the traditional campaign concentrates on brand-building and pushing the personalities of its presenters, the digital campaign uses the immediacy of the media to announce the names scheduled to appear on live programmes the following morning. So from 6 pm every evening, the Metro’s digital screens will inform Parisian commuters about who will be guesting on their favourite radio the next day.

Needless to say that the highly contested audience measurement cameras remain switched off. That doesn’t bother the agency, which is confident that its existing metrics, which cover static postering in the Metro, are reliable enough, nor the client, which considers the digital part of the campaign as a test, and will be analysing the results closely with a view to repeating the experience in the near future.

This entry was posted on Monday, September 6th, 2010 at 12:32 @564 and is filed under DailyDOOH Update. You can follow any responses to this entry through the RSS 2.0 feed. You can leave a response, or trackback from your own site.