We are very much looking forward to inspecting Mitsubishi Electric’s Diamond Vision OLED technology with our own eyes at #ISEUROPE at RAI Amsterdam, 1-3 February 2011 as we understand that it will be a central feature of the company’s presence at the event. 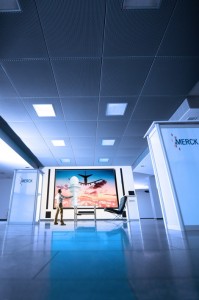 Here, however we see the Diamond Vision OLED screen installed in the reception area of a new research facility opened by Merck KGaA in Darmstadt, Germany.

This is we believe the world’s first large screen OLED display. It’s 3.8m x 2.3m and the new screen is being used to welcome visitors to the centre, as a presentation aid, and as a stunning backdrop to events hosted at the Darmstadt facility.

Mitsubishi Electric and Merck, a world leader in electroluminescent materials, are of course working closely together to develop the next generation of OLED compounds for use in display products so this install in their reception area makes a lot of sense.

Built from any number of standard 128 x 128 pixel OLED modules, each measuring 384mm square and weighing just eight kilograms, the Diamond Vision OLED is fully scalable and can be used to create an endless variety of screen sizes or shapes, even against rounded surfaces.

The screen’s 99mm depth allows it to be installed in restricted spaces such as narrow paths and station concourses. Visually, the screen outperforms the very best 3mm LED screens, yet is over 60 per cent slimmer and 30 per cent lighter.

We are also told (but have NOT seen pricing) that cost is also significantly less than a comparable LED screen!

This entry was posted on Monday, November 22nd, 2010 at 12:34 @565 and is filed under DailyDOOH Update. You can follow any responses to this entry through the RSS 2.0 feed. You can leave a response, or trackback from your own site.