It’s only a few weeks now until we announce our new #DSTop10 at #dse2011 in Las Vegas but as you know ‘thirty’ recently became a (new) convenient number for us to have narrowed down the hundreds and hundreds of digital signage software vendors out there to. 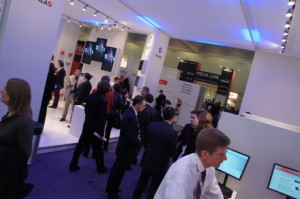 This was the quietest we saw the Scala stand all show

After a major show we usually like to wind up those in the top ten who were not present but now of course we have, as you might say, a more target rich environment, so without further ado let’s ask with regard #ISEUROPE “where were you top thirty?”

1080Dots – last seen in IBC’s (sort of) Digital Signage zone. Not sure who does their marketing but they are obviously missing a trick. They had a nice product aimed at and coming from the creative community so let’s hope they see sense and exhibit at #ScreenMediaExpo in May in London.

Adflow Networks – we wouldn’t expect these guys to exhibit in Europe.

BARCO dZine – dZine exhibited with their partner BARCO last year and this year they were on the same stand, albeit with NEW owner BARCO. There’s a good chance to see these folks again as they are exhibiting at #ScreenMediaExpo in May in London.

BroadSign – #ISEUROPE is not a show they ever do. Not exhibiting at #dse2011 either although sponsoring. #ScreenMediaExpo is very much where they spend the most money.

CoolSign† – were in an awfully unlucky position in the middle of Hall 10. Whilst it was close to Intel’s magnificent stand the Haivision booth (last seen in same style at InfoComm last year when it was plain old CoolSign of course) was a bit dark and dull. The only bright spot was the sky blue NYSE trading floor style jackets those manning the stand were made to wear!! These folks are not exhibiting at #dse2011 either.

C-nario† – great stand as usual in Hall 12 and GREAT content. We heard that new CEO Tamir gave his VARs a right telling off one of the days pre-show and it seems that half the C-naro staff we know have left or been fired but this would have been a good show for them no doubt. Did we say great content? yep these folks got the content story this time spot on.

EnQii – umm when was the last time you saw these folks exhibit? Not at #dse2011 or #ScreenMediaExpo either. One hopes that as key figures in the DSA they will be at #CETW.

Four Winds Interactive – we wouldn’t expect these folks to exhibit in Europe. You will be able to see them at #dse2011

Harris Broadcast† – had a very prominent stand in Hall 12. As probably one of the best supporters of the industry you wouldn’t be surprised to know that you can seem them at #dse2011 and at #screenmediaexpo next

Hiperwall – we wouldn’t expect these folks to exhibit at our sort of tradeshows but we’d like to see and hear more from them. Someone said that they were on the NEC booth somewhere but if they were they were hidden away. We still don’t quite understand why Intel haven’t figured out that Hiperwall’s technology suits Intel’s aims of one CPU per screen perfectly and why these guys aren’t all over the Intel stand at shows. Anyway there’s a good chance to see them at #dse2011 as they will be on the NEC America’s stand.

Nanonation – we wouldn’t expect these folks to exhibit in Europe.

NCR NetKey – not at #ISEUROPE but will be exhibiting at #ScreenMediaExpo

NEOCAST (from Real Digital Media) – we wouldn’t expect these folks to exhibit in Europe.

Net Display Systems PADS – had a booth in the DS showcase area in Hall 10 and they told us that they has “over 150 unique companies, non-existing partners, who visited”

Omnivex – nice big stand in Hall 12 and we spent a lot of time with them. They will be at #dse2011 and at #SceenMediaExpo. Unsung heroes of shows in many ways.

ONELAN† – nice to see these folks take a big’ish stand in Hall 12. Tucked away in the corner near Scala. They will also be at #ScreenMediaExpo

Scala – it pains us to have to say it but these folks had by far the busiest stand(s) (cos’ two stands were joined overhead) in Hall 12. Awful coffee but booth was buzzing (not just cos’ of the coffee) and ALWAYS packed. People we spoke to said that referrals from HP led to a lot of the traffic and certainly HP branding and HP screens were all over the place. We don’t believe it was people kicking tyres either. This seemed like genuine business. Scala next up are at #dse2011 and at #ScreenMediaExpo. I’d like to see HP with their own stand at #ScreenMediaExpo though (which would be good for the industry) but Scala can walk away from ISE knowing that they had the busiest time by far. It was nice also to see CEO Gerard Bucas on the booth looking incredibly well.

SignageLive† – we think this was the first time for Signagelive exhibiting in Amsterdam and they were sadly tucked away on the DS Showcase stand in Hall 10. That was a real shame and didn’t we think do them any favours branding wise. These guys are firmly in our top ten and should have had their own stand somwhere. Anyway they will be exhibiting at #dse2011 with a partner and of course are great supporters of #ScreenMediaExpo.

Splash Digital Player (formerly the BMS Digital Player), from Ayuda Media Systems† – CEO Andreas Soupliotis was there, presenting at #DiSCO11 and of course made quite a big splash with the announcement of the open source digital signage player. Ayuda have taken stand space at both #dse2011 and #ScreenMediaExpo (in fact the latter show will be where all the OpenSplash partner / supporter announcements will be made).

STRATACACHE† – these guys choose to support #ScreenMediaExpo. They will also be at #dse2011 we believe.

Symon Dacon – small stand in Hall 12. They are also exhibiting at #ScreenMediaExpo in May in London.

Vista Spyder (from Christie Digital†) Huge stand in Hall 1. May NOT be at #ScreenMediaExpo though which surprises us immensely if that is the case. Real shame. Look out for Christie’s Managed Services group and Arsenal Integrated (Virtual Shelf and Buzzwall people) to have a nice presence at #dse2011 though!!!

VUKUNET† (NEC) – NEC had a big stand of course but for the first time VUKUNET had a presence of sorts. See interview with new hire Dirk Huelsermann here. Looks like we will see and hear more of VUKUNET in Europe now.

WireSpring† – we wouldn’t expect these folks to exhibit in Europe (BUT perhaps they ought to as they have tons of successful partners in the region).

X20 – no sign, but they are more focussed on North America.

YCD Multimedia were as usual on the Intel booth, we counted as many as 7 people from their UK, Belgium and Israel offices at the show. Their technology was powering a 4K Video Wall based on Intel’s new Sunday bridge technology one of the interactive applications and they had their nice YCD|RAMP solution on display.

~Sedna Presenter – no sign which was a shame. They need to be at #ScreenMediaExpo.

Out of those; Cayin had a stand (same size as ONELAN) in Hall 12, we think we saw WebDT around somewhere and Digital View disguised themselves in Hall 10 as LOVECONTENT and missed a fantastic opportunity to boot being right opposite the Intel booth. LOVECONTENT are at #ScreenMediaExpo but let’s hope that they see sense and use this as an opportunity to brand Digital View and not mess about with things they know nothing about.

Navori† had a nice big stand in Hall 12 and we spent 30 minutes with them going through their offering. It’s nice, it’s enterprise-like but we don’t see how it’s that much different to all the other good enterprise wide digital signage systems out there, like Omnivex (which is one of our favourites in this space).

We were impressed with Brightsign (or do we mean Roku?) who were in Hall 12 and we believe that they will be at #ScreenMediaExpo – they are definitely well worth a look.

This entry was posted on Friday, February 4th, 2011 at 10:01 @459 and is filed under DailyDOOH Update. You can follow any responses to this entry through the RSS 2.0 feed. You can leave a response, or trackback from your own site.