We stopped in last Friday to meet with Benoit Johnson, president of Vif Communications, Montreal, at the new Laurentian Bank branch in LaSalle, Que.. 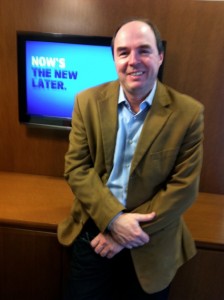 We had already written about the bank’s logo as a video wall In late January, but Johnson wanted to explain a bit about its workings and show us some of the other digital features Vif had installed at the bank. These include in-office screens for account managers and table-top-like screens at teller counters.

First, the logo itself is pretty impressive. It’s composed of six small screens set in a 10’ x 10’ white wall, running, together and individually, various information and bank messages. There are four larger control screens behind that are remotely PC managed, but we were asked to keep certain details secret. The logo can be seen from the street when the bank is closed, although it is turned off for several hours in the middle of the night.

“We still have to do a little tweaking of the screens because we’ve discovered that there’s a window glare that can obscure messages at certain times of the day,” says Johnson.

Ten individual offices also hold 32” screens which ordinarily run continuous bank messages. However, when dealing with a customer, the screens switch over and adapt to power point presentations for client information.

And eight 19” table top screens are integrated into teller counters for other bank messages and use.

Vif handled in installation and management of the whole system, with the technology backing of the video wall by iGotcha Media, Montreal.

“We’re really happy with everything and so are the customers,” says Myrille Fournier, the bank branch’s director of customer service. “We’ve done away with all the paper posters and other material that were at the old branch.”

The bank also has two screens from another unknown company showing customer wait information, along with a PC for free customer use, for an almost paper-free environment in the bright locale outfitted in the bank’s corporate blue and yellow colours.

Among its other customers, Vif also provides a network of screens in the fresh produce departments of 196 IGA grocery stores in Quebec and, as an affiliate of the Canadian Health Media Network, has 35 Medik TV screens in 35 health clinics in Quebec.

Johnson, head of the five-year-old Vif, is a former television producer and on-air morning man on the French-language TVA network.

This entry was posted on Tuesday, February 8th, 2011 at 07:53 @370 and is filed under DailyDOOH Update. You can follow any responses to this entry through the RSS 2.0 feed. You can leave a response, or trackback from your own site.