Hot on the heels of our story about T-shirts sporting QR codes comes a quirky new one from Austin, Texas, where Phillips & Company, a global public relations and business development consulting firm, has launched Blue Marble, a new patent-pending marketing service that enables any business to transform its rooftop into a space-accessible billboard by integrating a dynamic QR code into the physical site, taking an aerial or satellite image from space and making it accessible in leading navigation applications like Google Earth and Google Maps. 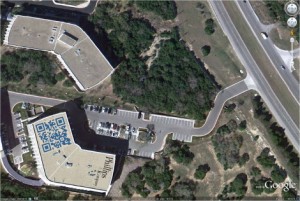 Blue Marble is a comprehensive branding and marketing service for any size business with a ‘space-accessible profile’ ie. the profile or image of a building, facility, landmark, or other entity visible from the air or from space by satellite. Blue Marble enables businesses, cities, malls, schools, churches and other facilities to leverage their space-accessible profile in a world where everyone is viewing the world ‘as seen from space’.

Blue Marble connects a company’s physical profile on Earth to the millions of people searching for products, services and navigation on the Internet. Mapping and navigational applications are consistently ranked in the top five apps for smart phones. Additionally, Google Earth has been downloaded over 400 million times.

By integrating a QR readable code into the space-accessible profile, mobile users can access dynamic marketing programs, videos, digital coupons and other content while viewing the specific geographical location.

“Space is not just a destination – it is a platform for applications and services,” says Rich Phillips, Phillips & Company president. “Our use of satellite imagery in day-to-day applications is proof that our ‘big blue marble’ called Earth is one global market accessible through the Internet, mobile phones and GPS devices. By using QR code technology, we are taking dynamic marketing to literally the next level – low-earth orbit. But the benefits are to any company on Earth that wants to optimize its real estate investment and build a marketing program that can take advantage of today’s mobile revolution.”

Satellite images are updated on Google Maps and Google Earth by Metropolitan Service Areas on a rolling basis based on scheduled satellite and aerial updates managed by Google. Phillips & Company has developed its own proprietary schedule based on projected updates to satellite imagery.

Blue Marble pricing for MSAs on schedule includes a one-time service charge starting at US$8,500 and a recurring US$200 support fee, which includes QR code production, site installation, content strategy consulting, satellite or aerial image capture and monthly access to a mobile content management and behavioral analytics platform that delivers real-time data to the customer on scans and usage. For companies wishing to schedule an image capture and event off-schedule, there is an additional charge of $49,500 for each MSA.

Phillips also offers a companion PR event program, which includes the management of events in coordination with the image capture and the development and execution of marketing and media campaigns.

The QR code will be made available on Google Maps for at least 12 months from image capture. Phillips & Co. management says that while standard billboards can cost between $10,000 and $30,000 per month on average and are limited by geography, a space-accessible billboard is available at a cost 75%-to-98% less and to everyone on the planet with Internet access.

Phillips has partnered with 44Doors, a leading provider of mobile marketing platforms, to manage content and deliver actionable marketing data to Blue Marble customers. 44doors Capture delivers relevant messaging and content to mobile devices based on location, time of day, consumer preferences and other variables, driving traffic to specific online and offline points of engagement and purchase.

Tim Hayden, 44Doors chief marketing officer, says, “This has to be one of the most creative and powerful ways to use QR codes we’ve seen. Blue Marble is bringing an exciting solution to marketers to capitalize on rising trends in smartphone use and organic search. Companies will now have a number of ways to deliver relevant mobile apps, promotions and product information to an audience that finds them on a map.”

This entry was posted on Sunday, October 9th, 2011 at 18:04 @794 and is filed under DailyDOOH Update. You can follow any responses to this entry through the RSS 2.0 feed. You can leave a response, or trackback from your own site.

One Response to “Space-Accessible Billboards”