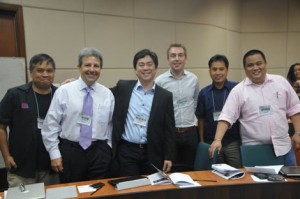 Manolo (far left) and friends (oh and Bob Michaels too!)

Ladies and Gentlemen let me introduce to you, Manolo Almagro who (as well as continuing with his weekly column ‘The Power Of Three‘) will be covering for us Retail’s BIG Show (NRF’s flagship industry event held annually in New York City of course) in January, closely followed by the Mobile FirstLook Strategy 2012 Conference and in April the 2012 Retail Technology Conference in Orlando.

We had lots and lots of compliments on Gail’s coverage of the CIO Retail Summit held in Scottsdale, AZ back in August – an event that when it happens next time we’d encourage any vendor who focusses on retail to attend.

This entry was posted on Tuesday, December 20th, 2011 at 09:32 @439 and is filed under Scuttlebut. You can follow any responses to this entry through the RSS 2.0 feed. You can leave a response, or trackback from your own site.