An Interview With Brian Reid of Mirrus

If plans come to pass as forecast, Mirrus will be a company to really watch come Q2, 2012. 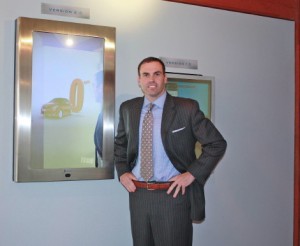 That’s when the firm hopes to officially release a slate of new products currently under final development and in test mode.

“Now that we’ve told you that, the pressure is on,” says Brian Reid, the president who founded the company in 2006 with the aim of building consumer engagement platforms to help leading brands to communicate and connect with consumers.

Reid and longtime friend Ryan Clayton, senior vice-president international business, are the firm’s major owners along with some private investors. However, with a growing product line and expansion on the horizon. Mirrus may well be looking for investors in the future.

“We’re already distributing our advertising mirrors in the Dominican Republic, and are in discussions for expanding into Brazil in the sports, transportation and retail sectors to take advantage of the upcoming World Cup in 2014 and Olympic Games in 2016,” says Reid. Europe is also in view.

For Reid and Layton to consider these sports events in the realm of Mirrus’s expansion isn’t surprising. Both men played university football, with Layton going on to play professional rugby in Europe, and they have admittedly taken advantage of their contacts in the sports world to build the business. 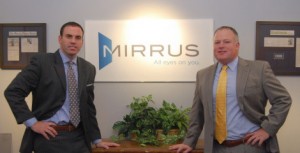 The company launched Mirrus with fabric printing for custom life jackets and boat fender covers and then for stadium seat covers for such sports venues as NASCAR stadiums. (The company’s North Carolina’s head office is the heart of NASCAR country.) This seat product enabled brands to communicate to the fans in attendance while simultaneously reaching the television audience when empty seats were shown during a typical broadcast. Creating an advertising medium that effectively reaches the consumer through the use of an existing under-utilized asset resulted in a tremendous amount of interest from prominent venues that were looking for new ways to generate advertising revenue.

Mirrus then determined that there was another place a person was guaranteed to visit when attending a sporting event: the restroom, leading to what was the become the company’s flagship product: interactive advertising mirrors installed over the sinks in washrooms.

“It was a natural, because in sports venues, fans use the washroom an average of 2.8 times. In airports, our next locales, they use them 1.8 times,” says Reid. “The over-the-sink locale meant there was no negativity. And with our technology we were able to count the number of people seeing the ads on the mirrors and the dwell time looking at them. We could provide concrete audience metrics associated with the effectiveness of that advertising vehicle.”

“From there, we knew that we would proceed into the retail environment.”

The next step was mirrors for dressing rooms, end caps, a new counter-top mirror: perfect for cosmetic counters and for eyeglass sales, as well as a new shoe mirror for shoe stores. Both of these are among the Q2 release plans.

Another exciting new product in Q2 will be ‘Mirra, the virtual suggestive retail assistant’. This will be a full-length mirror in dressing rooms, which incorporates an RFID reader that reads the garment tag when a person tries on an outfit. Coming up on the mirror will be suggested accessories that will go well with that outfit, such as purses, shoes or other complementary items.

“This will be only as good as the retailer loads into his MirrusWare, our proprietary content management system,” says Reid. “We’ll work closely with the retailer for this, for the scheduling, content, and real-time information across his store or store network. These days, it’s important to educate and help the retailer get a sales lift. That’s our whole premise: to engage the customer and help the retailer increase sales.”

Developed on the foundation of the company’s proprietary Mirror Image technology, Mirrus has now also developed ‘CoolerVision’, geared for grocery stores, supermarkets and convenience stores. CoolerVision enables retailers to deliver video advertising on cooler doors, all networked and controlled from a remote location. It involves forward projection, special film, and is powered by MirrusWare. The video can be programmed according to day parts, and like with all Mirrus products, will provide the metrics that agencies and advertisers, as well as retailers, are looking for.

Also for the grocery market, Mirrus will offer GlassVision, which involves video film, rear projection and a media player, again, powered by MirrusWare.

”We’re always looking for ways to give the client incremental revenues as well as unparalled engagement with the customer,” says Reid who says that the company is getting numerous inquiries from Europe and expects to be showing most of its new developments at ISE 2012 in Amsterdam. “Our strategy is to be our clients’ partners, their consultants to help get that sales lift.”

The company (the full name of which is actually LuxuryTec DBA Mirrus) plans to brand Mirra as its own, but other products can all be customized using MirrusWare, branded by the retailer with ‘powered by Mirrus’. (The company also offers a scent product under the WaltzillAroma name, in partnership with RK Marketing.)

While Mirrus’s new offerings are all planned for Q2 official launch, Reid says, “We’ll postpone as necessary anything that isn’t 100% ready. We want to stay true in our line. There’s lots of time.”

This entry was posted on Thursday, January 12th, 2012 at 18:00 @791 and is filed under Scuttlebut. You can follow any responses to this entry through the RSS 2.0 feed. You can leave a response, or trackback from your own site.