Recently, Nielsen released its Fourth Screen Network Audience Report. One quote caught my attention, stating that Nielsen “confirmed the clear acceleration of monthly traffic in malls during the fourth quarter.”

Unfortunately, I was unable to secure a copy of this report. But the message Nielsen is sending is clear – mall traffic is increasing.

This message/reported fact got me thinking that with the retail industry in such state of flux, how could it be that mall traffic is actually increasing? So I set about to find various data points that either support or conflict with this Nielsen finding. 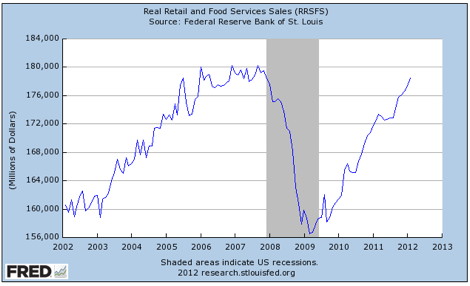 Also, e-commerce retail sales continue to grow. Total e-commerce sales for 2011 were $194.3 billion, an increase of 16.1 percent from 2010. E-commerce sales in 2011 accounted for 4.6 percent of total retail sales (see Chart 2). Is it farfetched to think that this would result in fewer trips to the mall? 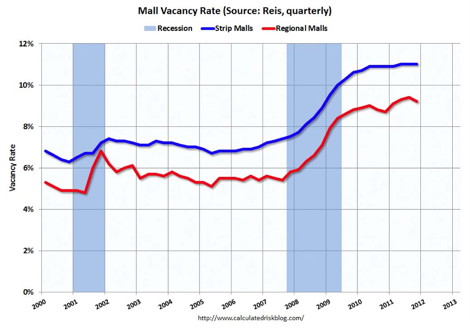 Cassidy Turley, in its February 2012 U.S. Retail Report notes, however, that the market is actually stronger than it appears, in that leasing was the strongest since 2007. They cite the bankruptcies of retailers such as Blockbuster, Borders, etc. that returned 15 million square feet of retail space to the market. While it may be the case that an excessive amount of retail real estate was returned to the market in 2011, this trend is not over. Other retailers will go broke in 2012, and some, like Best Buy, Gap and Sears, etc. will continue to return retail space to the market.
Finally, consider the anemic state of mall construction. According to ChainLinks Retail Advisors U.S. National Retail Report 2012 Forecast, 13 million square feet of new shopping center construction was added during 2011. To put this in perspective, the Report notes, “At the peak of the last real estate cycle (2004 to 2007), deliveries averaged over 10 times this total, or 135 million square feet per year.

We are tracking just under 12 million square feet of shopping center space currently under construction throughout the United States, the lowest amount that we have ever tracked.”

In closing, I readily admit that I am not a mall traffic-counting expert like Nielsen. Nor do I get paid to produce such studies. But various microeconomic trends cause me to have a gut level response that questions Nielsen’s findings. Perhaps next quarter, Nielsen will make available its First Quarter Fourth Screen Network Audience Report to me, so that I can learn the error of my ways.

This entry was posted on Wednesday, April 11th, 2012 at 21:29 @937 and is filed under DailyDOOH Update. You can follow any responses to this entry through the RSS 2.0 feed. You can leave a response, or trackback from your own site.