Players and guests at the PGA Tour in Torrey Pines, La Jolla, California, last week were treated to innovative digital screen technology, thanks to the San Diego startup Locbit. 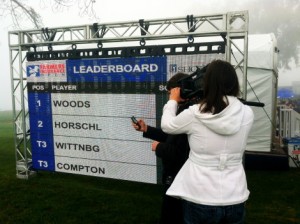 Boian Spassov shows a reporter how to control digital board.

The massive screens throughout the course and event facilities are impressive on their own – displaying player bios, scores, and sponsor information – but a new interactive element was unveiled to allow anyone to engage with the screens via their mobile phone.

The addition of a QR code onto select screens allowed visitors to scan and automatically receive the latest scores onto a mobile phone. This resolved the issue of crowds standing around the screens waiting for all scores to display, which was especially welcome given the rainy weather at Torrey Pines during this year’s tournament.

Further, a development deployed by Locbit allowed Neovision, the screen operator, to control content on its screens via its mobile phone. When, eg., Tiger Woods (the eventual winner) stepped onto the green, managers used their mobile phone as a remote control to click and change the content on the massive screen, immediately displaying Woods’ bio or latest scoring detail. When another player came onto the course or another event began, the control was again from a mobile phone – versus needing a cumbersome laptop or having to call into a control center to make the changes.

Though only a year old and managed by Boian Spassov and Drew Lawrence, 20-something-year-old founders, Locbit is continually uncovering new possibilities for those that control content on digital screens and the masses that receive the content.

“Our tagline has always been that ‘Locbit makes the world clickable, allowing you to navigate the world as you do the web using a mobile device as your remote control’,” says Spassov. “While many people did not understand what we meant, it is exciting to continue to see this promise come alive, especially at such an exciting event as the PGA Tour.”

This was actually the third deployment of Locbit’s platform at a PGA Tour. The latest deployment was at the 2012 World Challenge at Sherwood Country Club, which followed deployment at the summer 2012 PGA AT&T National Golf Tournament. Locbit’s first implementation was for the PGA ShotLink scoring platform and at all events the Locbit platform has powered seamless content delivery.

At this latest Torrey Pines deployment, Newton had the ability to control his screens with a simple touch on his iPhone – an unparalleled experience of ease and instant access for managers of any high-profile event.

In addition, a Jan. 25 demonstration at Co-Merge, San Diego meeting rooms and shared office space, showed that not only Tour Operators could control digital screens, but ultimately anyone standing in front of a digital screen at Co-Merge could scan and control the content on that screen by sliding through information presented on their mobile phone.

At the PGA Tour, of course, not just anyone could control the content on the massive screens, but the unveiling of transactional two-way screen control provided a glimpse of the type of engagement unfolding in this industry for the millions of digital screens worldwide.

This entry was posted on Thursday, January 31st, 2013 at 10:00 @458 and is filed under DailyDOOH Update. You can follow any responses to this entry through the RSS 2.0 feed. You can leave a response, or trackback from your own site.