And we understand that Signagelive will also be distributing the bundle between Samsung screens and Signagelive software, although it wasn’t part of the official announcement on Thursday. 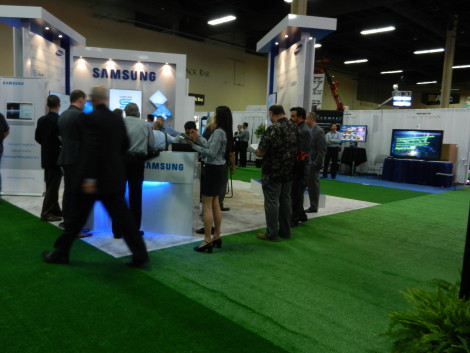 “Part of our strategic vision is to broaden the use of digital signage by customers who previously thought it wasn’t possible for their business, or too complicated to implement,” said Tod Pike, senior vice-president at Samsung’s Enterprise Business Division, in the announcement. “With the help of FASTSIGNS’ network and expertise, organizations of all sizes and types will be able to benefit from the advantages of digital signage that is engaging, easy to deploy, and cost-effective.”

Gary Feltham, FASTSIGNS senior vice-president of business development said, “Digital Signage isn’t coming to the signage industry; Digital Signage is already here. I think if you look at the static sign industry, its whole purpose is to deliver a message. And paying attention to movement is hard-wired into our brains, so we constantly like to see changing things and pay more attention to movement.”

(We were told that a case discussed during the educational day on Wednesday showed that, when a static sign that attracted 14,000 viewers was replaced with a digital sign, it attracted 84,000.)

In larger metropolitan areas where digital signage has been part of the landscape for several years, such New York, Las Vegas, London and Tokyo, the number of people that could be reached made digital signage in its more-expensive early days practical, Feltham said. But now that the price of digital signage technology has dropped, it’s becoming more cost-effective for businesses everywhere.

“And our customers are coming in asking about digital signage and asking for digital signage,” he said. “If we don’t offer it to them, someone else will. We’ve got to be an all-encompassing provider, or they’ll go somewhere else for digital and take their static business with them.”

In addition, Samsung announced that Louisville, Kentucky-based N. Glantz & Son, a full line supplier of sign supplies for digital, commercial, neon and electrical signs,, has joined its distributor network. With its heritage in the signage market and nationwide reach, N. Glantz & Son will help expand availability of Samsung’s dynamic digital signage solutions to its customer base of traditional sign makers. Signagelive is also becoming a partner of Glantz.

Joe Hartman, co-CEO of N. Glantz & Son, said, “The traditional signage market is changing again, and we will be taking a leadership role in helping our industry and our customers participate in this exciting evolution. Digital is a great opportunity for our customers to employ new technology, which complements their existing core competency, and our resources are in place to facilitate that transition.”

Dennis Wells, executive director of business development for N. Glantz & Son, said that digital signage and static signage are “definitely complementary. We’re constantly seeing obvious signs of digital coming in and replacing what used to be static, such as digital menu board. It’s definitely happening, and we’re going to help our customer base be ready for it.”

N. Glantz & Son also has partnerships with a kiosk enclosure provider and digital signage content provider Saddle Ranch Digital, so that it can provide a turnkey solution to its small- and medium-sized sign shop customers.

FASTSIGNS locations now will be able to offer Samsung’s ME and MD Series LED-lit displays as a dynamic signage alternative, and upcoming models will support Samsung’s Smart Signage Platform featuring an embedded, open-source media player and software developers kit. Samsung also will be providing training for FASTSIGNS staff to help them advise customers in choosing the right dynamic digital signage solutions for their business needs.

“We’re seeing an increase in the demand for dynamic digital signage solutions from our customer base,” Feltham said. “They are in need of a solution that is simple to deploy, can deliver their message in a compelling way and provides real return on investment.”

FASTSIGNS is currently highlighting digital signage in its TV campaign.

This entry was posted on Friday, April 5th, 2013 at 08:39 @402 and is filed under DailyDOOH Update. You can follow any responses to this entry through the RSS 2.0 feed. You can leave a response, or trackback from your own site.