An Interview With NCM’s Cliff Marks

“Cinema advertising has been growing in the U.S. for the past 11 years, mostly at a double digit annual rate, but that growth slowed up to a more single digit rate as the industry sector has matured,” Cliff Marks, president of marketing ad sales at National CineMedia Media Networks, told us in an exclusive interview Wednesday following the NCM Upfront in New York. 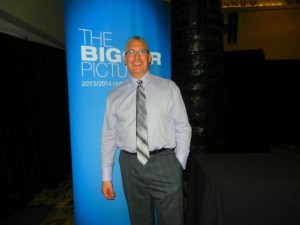 What has helped the industry become so mature and accepted by agencies as part of their regular consideration is that the industry has developed scale. Advertisers can buy national advertising as well as local and regional advertising. In fact, 80% of NCM’s ad sales is national, 20% local and regional. But don’t think of that 20% as minor. It adds up to about $90 million.

“However, as U.S. audiences become more and more familiar with it, most people like it and the rest tolerate it,” said Marks.

This was the second year that NCM put on its Upfront, growing from last year’s 600 attendants to this year’s almost 700. An upfront is common with TV broadcasters – this year’s was sandwiched in between two TV upfronts – but why for NCM?

“Because of our reach,“ Marks said. “When you look at out reach, we were the 11th largest in terms of networks last year, and now we’ve moved up to 8th. Ever more brands are giving us a higher percentage of their budgets. In fact, we sometimes sell out of advertising space, especially in May and June.

“And we give an entertaining show, giving advertisers and agency planners and buyers some behind-the-scenes content and talent.”

Indeed, this year’s Upfront, along with the mandatory popcorn and soft drinks pre-show, included a talk by director Guillermo del Toro who discussed his entrancement with theatre from his childhood days and showed scenes from his sci-fi action adventure Pacific Rim – expected to appeal especially to males of all ages, and the little boy in all men.

At every theatre seat, there were also three pair of 3D glasses, each with different coloured rims. When the audience donned one colour, they were treated to some creative 3D commercials. Then if they donned one or other of the others, they saw a commercial involving a puppy, that had a different ending depending on which colour they were wearing.

NCM is owned by theatre owners AMC Entertainment Inc., Cinemark Holdings Inc., and Regal Entertainment Group. This year, as Marks told the audience during the formal presentation, it has added three new partners: Entertainment Weekly to help create branded entertainment, and both Four Square and Twitter to link closer to its audience.

“We decided not to align with DOOH as such,” said Marks. “Rather, we’re more of a distant cousin. Most DOOH doesn’t have audio. And most are on small screens. There are really not a lot of similarities. But given that, we clearly are DOOH. So we tend to align for the numbers, but we portray and market ourselves as cinema.”

Marks says that there is still room for growth but there are challenges ahead for the industry, due to the changing media world with digital, mobile and social.

NCM’s Cliff Marks will be presenting at The DailyDOOH Investor Conference which is being held in New York 23rd to 24th October 2013.

This entry was posted on Friday, May 17th, 2013 at 07:23 @349 and is filed under DailyDOOH Update. You can follow any responses to this entry through the RSS 2.0 feed. You can leave a response, or trackback from your own site.