Barry Frey After A Week On The Job

It’s certainly not fair of us to discern what kind of a leader Barry Frey, new president and CEO of the Digital Place-based Advertising Association, will be – After all, here he was being asked to give an in-depth interview after only seven days on the job. 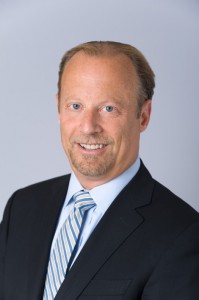 But you can tell that he has a global picture of and solid background in the media world, and when he starts quoting Churchill, you have to figure that he is well read and admires certain leaders on whom he probably bases some of his own actions or ideas.

“My role as a leader is not to push people in a direction, but rather to help them get to where they need to go,” Frey answered diplomatically when asked about his own leadership qualities when dealing with the diverse and often strongly opinionated members of the DPAA. “It’s not a matter of pushing people, but more about understanding their needs and helping them get there – and to create the right environment for that to happen.”

When we talked to Frey, he was prepping for the first DPAA Board meeting to be held next week, so priorities were hard to pin down. You can tell that he’s still learning the ropes of who is who and what is what in the digital out-of-home sector. However, during our lengthy interview, we discovered that he is well aware of what is happening in the media world in general.

“This is a good time for what’s going on in the media ecosystem,” he said. “I have a perspective of where technology has been able to take media products and then where media helps with advertising, and with advertiser and agency needs. I’ve worked across all media with a focus on digital and TV. Video is being seen everywhere. Magazines, TV and other media are being compromised. We have to understand what will get us to the next level, but we have to understand all media. We cannot go in a vacuum. But there is a plethora of digital opportunities, great opportunities.

“This industry has huge potential. Members – and potential members – can help build a big pie together – whether network operators, software developers, others. Digital Place-based media offers both video and advertising, and more dwell time. It’s an exciting place to be, in a fast-changing media ecosystem.”

Frey expects that his priorities will be firmer after the Board meeting, when he knows better what tactics might be used, particularly to raise awareness among advertisers and agencies.

“We have to tell the story of this important and vibrant ecosystem,” he said. “We have to inform advertisers and agencies how we can provide solutions. We are at the moment on a great shifting tide, connecting video and digital solutions. We must get the message out about our vibrant offerings.”

Frey admits he still has much to learn. While he knows the global market, the intricacies of working with OVAB Europe, meeting members of the Digital Signage Federation, plans for any DPAA event during Digital Signage Expo 2014 and other events are still on his agenda.

“I do want to run a large, high level, successful DPAA Digital Media Summit in October, but it still has to be discussed,” he said. “A good conference involves learning and the exchange of ideas, and it has to be enjoyable. I want a top notch conference.”

“As for Digital Signage Expo in Las Vegas, if we’ve done something in the past, then I anticipate that we’ll do something again.”

Frey expects to continue to work with the Outdoor Advertising Association of America as developed under Susan Danaher, former DPAA president and CEO. But he would like to seek out how the DPAA might also work effectively with the Association of National Advertisers, a group he knows well from his days working with TV. And he also expects to continue the DPAA’s outreach to agency planners and buyers, along with advertisers, to continue to build awareness of the industry and how to plan and buy more easily.

“We want to tweek this system, but it’s not done yet,” he says.

So there it is: a week’s worth of fast learning and a lot more to go. Frey is obviously looking at the big media picture. We’ll be interested to see his next steps – and we expect that the DPAA Digital Media Summit in October will show whether he’s been really able to put his own stamp on the organization that he wants to take to the next level.

The 6th annual DPAA Digital Media Summit will be held Tuesday October 22 at the New York Hilton, immediately followed by The DailyDOOH Investor Conference, which will be held Wednesday 23 and Thursday 24 October 2013 in New York and also at the same venue. There are many other events scheduled for #dpbmedia week including the Thought Leadership Summit ‘Billboards Unplugged’ on Monday October 21 and the NEC Showcase on Wednesday October 23.

This entry was posted on Thursday, May 30th, 2013 at 13:01 @584 and is filed under Scuttlebut. You can follow any responses to this entry through the RSS 2.0 feed. You can leave a response, or trackback from your own site.