Connecting to the Internet when traveling through many of Canadian airports, what you’ll see in advertising on your laptop, iPad. Tablet and cell phones will now be handled through a partnership between the familiar Boingo and BOLDstreet Wireless Wi-Fi. 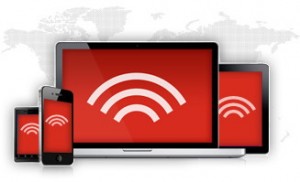 Boingo Media will represent display advertising opportunities at eight airports in British Columbia, Ontario and Alberta, including Calgary International Airport, where Boingo Media is the exclusive Wi-Fi sponsorship partner. The non-exclusive deals are with the airports of Edmonton, Victoria, Kelowna Fort McMurray, London (Ont.), Prince George and Comox. The company will also enable brands to reach shoppers on the go with video, display and other advertising engagements at 15 malls in Alberta and Ontario provinces, including Toronto’s Yorkdale Shopping Centre, a luxury shopping destination and one of the largest malls in Canada.

This entry was posted on Sunday, August 25th, 2013 at 09:49 @450 and is filed under Scuttlebut. You can follow any responses to this entry through the RSS 2.0 feed. You can leave a response, or trackback from your own site.