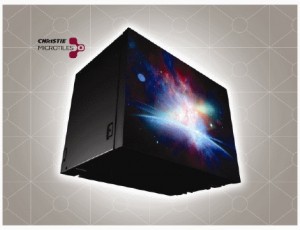 Like its earlier counterpart, it offers high resolution, high brightness displays that bring digital content to life in rich, vivid colors. It delivers excellent contrast with deeper blacks and image uniformity in even the most demanding indoor high ambient light environments.

With a much wider color palette than conventional LCD and plasma displays, Christie MicroTiles display pure, saturated, accurate colors, making them ideal for public spaces. The modular display technology can be configured into nearly any shape and size to create an eye-catching digital canvas.

This entry was posted on Friday, September 6th, 2013 at 10:00 @458 and is filed under DailyDOOH Update. You can follow any responses to this entry through the RSS 2.0 feed. You can leave a response, or trackback from your own site.