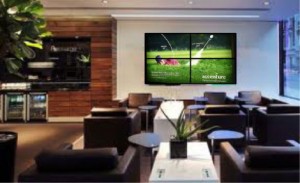 The RMG Office Media Network, which is expected to be the United States’ largest in-office digital media network to engage audiences with sight, sound, and motion, will debut at 650 Regus business centers in top DMAs — including New York, Los Angeles, Chicago, Boston and San Francisco. The network is expected to go live in Dec./13, and will feature content from Bloomberg Television. 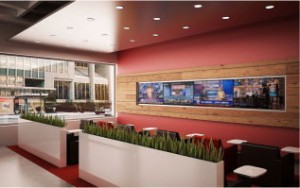 The RMG Office Media Network will be measured by Nielsen..

“This is another exciting industry first from Regus,” says Bob Geaudreau, Regus’s executive vice-president sales and marketing. “With this extensive private network, we will be able to bring our members news updates from Bloomberg and engaging content. In doing so, we hope to help keep them well informed and to work smarter,” 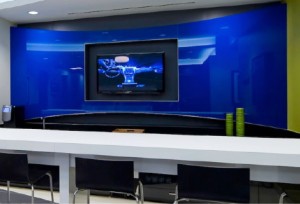 “This network delivers an important audience of business professionals that are hard to reach with traditional media,” says Garry McGuire, CEO, RMG Networks.

“They make IT purchase decisions, travel frequently, and influence telecom and large ticket retail purchases. This network is a natural complement to our established Airline Media Network, both delivering video advertising to affluent consumers outside the home.”

Regus is the world’s largest provider of flexible workplaces, with products and services ranging from fully equipped offices to professional meeting rooms, business lounges and the world’s largest network of video communication studios. Over a million customers a day benefit from our locations spread across almost 100 countries. With its ever-expanding range of its innovat8ve products and services, we enable people to work their way, whether it’s from home, on the road or from an office.

Regus is a global organization with more than 1,500 business centres across some 600 cities. Its more than a million customers include half of the Fotrtune 500, as well as hundreds of thousands of start-ups, and small and medium-sized companies.

Regus was founded in Brussels, Belgium in 1989, is headquartered in Luxembourg and listed on the London Stock Exchange.

This entry was posted on Thursday, October 17th, 2013 at 00:01 @042 and is filed under DailyDOOH Update. You can follow any responses to this entry through the RSS 2.0 feed. You can leave a response, or trackback from your own site.