In light of the events at Media Post’s Digital Out of Home awards, it seems obvious that the judges favored campaigns that included Gaming, Digital Projection, and Experiential campaigns with Social Media Integration. 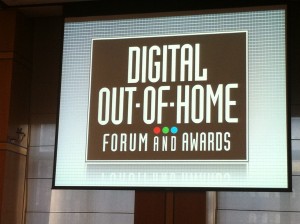 The winner of Best in Show at awards was Yahoo’s “Bus Stop Derby” a campaign that I felt was most certainly an engaging campaign, however I would have to agree that the best mobile campaigns are executed overseas like Unilever Turkey’s campaign for Cornetto Ice Cream, which really provided consumers with real promotional value based on that users location at that moment.

Judging from the success of those campaigns, it would seem obvious to most that there is a synergy happening between DOOH and Mobile advertising.

When you consider the recent release of CK One’s mobile app, mobile advertisers can maximize ROI by the network effect by integrating digital out of home with mobile campaigns that allow consumers to take advantage of exclusive products and promotional takeaways based on  location which those users can then broadcast to their friends on social media.

This entry was posted on Monday, May 2nd, 2011 at 08:12 @383 and is filed under DailyDOOH Update. You can follow any responses to this entry through the RSS 2.0 feed. You can leave a response, or trackback from your own site.

One Response to “DOOH…Interactive. How?”