In our second toilet related story in 24 hours, see also MOOH Group DOOH Loos For Number One’s, we bring you the World’s first pee-controlled video game. Well actually we don’t because it’s not the World’s first at all so in reality it is number two for number one’s in a number of ways. 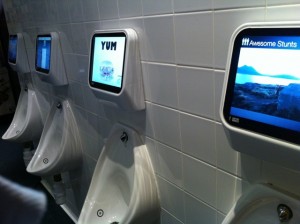 First it’s the second story we have run about using Mister Pee Pee in 24 hours and secondly it’s the second ‘pee-controlled video game’ we have seen. Those readers with a long … wait for it … memory (phew!) will remember our coverage of #dsj2011 in Tokyo back in June of the ‘Sega Urinal Signage‘

Anyway we digress. The story is that the Exhibit bar in Balham today unveiled hands-free video games controlled exclusively by visitors’ streams.

The company behind the idea, Captive Media tells us that male visitors to The Exhibit will be able to play one of three games that test the accuracy of their aim. 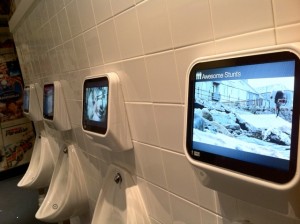 Gentlemen can control the games – such as the quiz game ‘Clever Dick’ simply by moving their stream left and right and tapping-in to men’s innate competitiveness (err not the size of their schlong then?). Scores we are told can be posted to an online leader board and to Twitter.

Interspersed with the games, the screens carry promotions for the bars offers, specials, or forthcoming events.

Evidence from a four month pre-launch trial in a Cambridge bar supposedly showed that Captive Media boosted footfall (don’t snigger), created local ‘buzz’ and had a significant impact on sales of the products promoted.

Captive Media director Mark Melford told us “It’s taken three years of research and development to get to this point. The reaction to the units so far has been incredible – it’s just so much fun.”

We are told that Captive Media will roll-out the product across selected bars from early 2012.

This entry was posted on Friday, November 25th, 2011 at 13:00 @583 and is filed under Scuttlebut. You can follow any responses to this entry through the RSS 2.0 feed. You can leave a response, or trackback from your own site.