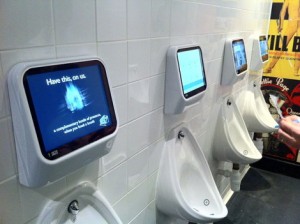 Whilst Media Displays did initially secure a GBP 80,000 investment (the ‘Dragon’ James Caan subsequently pulled out of the investment deal) the other two, as presenter Evan Davis likes to say “have walked away empty handed”.

Gordon MacSween, Founder, Captive Media, gave a confident enough presentation (shown on television Sunday evening September 16th 2012) and the ‘dragons’ had their fair amount of fun with the subject – retail magnate Theo Paphitis enjoyed his line “so your USP is in the ‘Pee’ then?” and Peter Jones we think enjoyed swaying in front of the urinal with water bottle in hand to control the game!

Gordon MacSween told us “The Dragons’ reaction earlier this year was a surprise, to say the least. But we’re now in a great position, with some solid investors and a very exciting future”

We understand that six weeks after filming back in May, Captive Media pitched to a room full of 70 professional investors in the City, were voted the number one pitch from 32 entries and left with a fistful of business cards.

Gordon added “Since filming for our appearance on Dragons’ Den, we’ve been offered more than £500k in funding by professional investors and have sold over £100k worth of products in six countries across Europe”.

This entry was posted on Monday, September 17th, 2012 at 10:52 @494 and is filed under DailyDOOH Update. You can follow any responses to this entry through the RSS 2.0 feed. You can leave a response, or trackback from your own site.