It’s no secret that BroadSign’s board have been pondering a software roll-up strategy of some sort for some time now AND have spoken to many digital signage software vendors about merger or acquisition (and of course desperate ones like ComQi have been knocking on their door for some time). 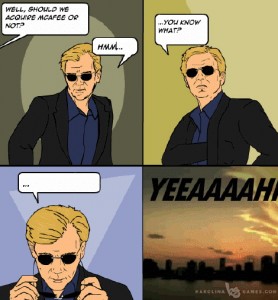 If BroadSign found the right partner or partners this would actually be quite a good thing for them and the industry.

BroadSign are doing pretty well now (it is almost two years to the day that they sought Chapter 11 protection) and probably turn over USD 10 Million or more a year and seemingly pick up new ad based network business almost every month (Airport Partners and Adspace Networks are rumoured to be concluded but officially unannounced concluded deals).

What then to make of the rumour at #dse2014 that Intel – allegedly currently looking around to acquire a digital signage software vendor have been considering BroadSign?

Those we spoke to in the digital signage software industry were rubbing their hands with glee – if an acquisition did happen it wouldn’t be long before BroadSign were out of business – closed down in a few short years just like Intel AIM Suite (nee Cognovision) was recently EOL’ed.

In fact, as Intel’s foray into digital signage software is allegedly pissing off its big chip buyers like Hewlett-Packard, and with a new Intel CEO who has publicly stated that he intends to focus as much as possible on chip making, we wouldn’t take too many bets that Jose’s USD 50 million venture (returning at best USD 3 million a year if that) is closed down before the next DSE comes around in 2015.

This entry was posted on Monday, February 17th, 2014 at 08:14 @385 and is filed under DailyDOOH Update. You can follow any responses to this entry through the RSS 2.0 feed. You can leave a response, or trackback from your own site.

3 Responses to “Intel To Acquire BroadSign?”