Our #mpdooh Roundup (Even The Dull Bits)

While I felt that the MediaPost Digital Out-of-Home Forum didn’t quite come up to the excellent standards of the previous year’s – and that still stands – don’t get me wrong: there were certainly some good and great speakers and panelists heard throughout the day.

So here’s a final rundown of the day with some of their comments and some of my thoughts.

Joe Mandese, MediaPost editor-in-chief, and Mike Bloxham, executive director marketing of the Media Behavior Institute, got the sessions off and running, speaking of the fact that the DOOH business is innovative and creative but a confusing and challenging medium, still difficult to buy and sell, often with costly rollouts, and a share-of-mind problem. There was also talk of techies going to have to rethink the industry, because with things like Near Field Communications, gesture, biometrics and the like, there’s a whole vanishing interface. 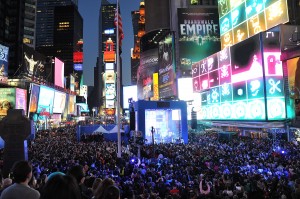 We had already covered the Times Square Moment art project that he discussed earlier this month, although we did learn that he hopes to see the 10-to-15 screens currently involved increase to between 40 and 50 screens by year end, and that it may also run at other times rather than only near midnight. The aim is to give the tourists and those working in the area something unexpected and non-commercial.

Jim Harris, CEO of the Wall Street Journal Office Network, and Tricia Nichols, global lead, consumer engagement and media strategy. Gap Brand at Gap Inc., not sure how she fits that long title on a business card, Ed had solid interest from the floor.

Harris asked a lot of well-thought out, penetrating questions to Nichols about Gap’s strategy and this was one well-spoken, well-prepared, attractive respondent. She spoke of how designers sit with the marketers in the Gap Creative Center to think more about the consumer than the brand. Asked how Gap thinks about DOOH, she said that it thinks of it in terms of things like music, culture and what it brings to the shopper marketing experience.

“If you think of DOOH in silo terms, it limits the opportunities,” she said, adding that DOOH offers a huge incremental experience with point-of-purchase. “We want it to be part of showing relevancy to the consumer.”

Nichols mentioned that if media can get ahead of the creative product and if agencies can get away from the channel planning mentality, there are great opportunities for DOOH. She also discussed how consumers like loyalty programs set up especially for them via social marketing.

Gap has worked with partners like Pepsi and is open to talk to other brands as long as they work well with the Gap brand.

“We want people to bond with the brand,” she said.

With a long dwell time and a captive audience, McGuire said that Delta, where it’s already installed, had seem incredible increases in interest-to-purchase.

McGuire also assuaged fears that the new airline program would not be measurable, noting that a data server on the plane can tell who watched, for how long, and more, with reporting done monthly. And, he said, there’s only a lead time of seven days. (McGuire should talk to the airline on which I flew from New York: its screens weren’t working at all!)

A panel on where DOOH belongs in a media plan brought about such comments as:

Somehow, although creative usually excites me, I just couldn’t get into the creative panel on the role of DOOH in brand storytelling. It seemed to be all over the place – or maybe I was just hungry. 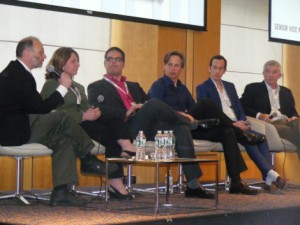 Some panels are just too big!

The post-lunch panel tried to hold attention but it was one of those five-persons-plus-moderator panels that I find too big and unwieldy.

I’d sooner see a solid debate between two opinionated individuals with a moderator or, at the most, a panel of three. Nevertheless, there were some good points. Among them:

Eric Mauriella, senior vice-president, Possible Worldwide, spoke of Macy’s Touchscreen Kiosks in the cosmetic department, installed to keep customers in-store rather than their leaving for a mall to buy products.

The kiosks are a guidance tool for browsing and finding the right beauty products for the individual; act as inspiration; and attract a younger audience. Among results he noted were that 40 people in each of the four stores where the kiosks are located actually have interaction with them daily; that there is an average of 4 min. 30 sec. dwell time; and another 50 people a day touch the kiosks.

The next panel was the most interesting – and entertaining – of the afternoon and one of the best of the day. We’ve already written about
Nielsen’s plans to add cinema and DOOH to its AdView.

However, we have some comments from Tony Jarvis, creative director, Olympic Media Consortium that we’re running separately (see here).

The next panel ran through some of the current technologies with the best comment coming from a panelist (sorry we missed exactly whom) who said that if he had the money, he’d “put it into a Center for Rehabilitation from Technology Overload.”

It was followed by Tim Daly, president, thinaire, who ran through the basics of NFC, noting that Apple is the one company that hasn’t yet announced an iPhone or smart phone with NFC capabilities.

And sorry, the last panel of the day, was just plain dull.

This entry was posted on Monday, April 16th, 2012 at 07:12 @342 and is filed under DailyDOOH Update. You can follow any responses to this entry through the RSS 2.0 feed. You can leave a response, or trackback from your own site.

One Response to “Our #mpdooh Roundup (Even The Dull Bits)”